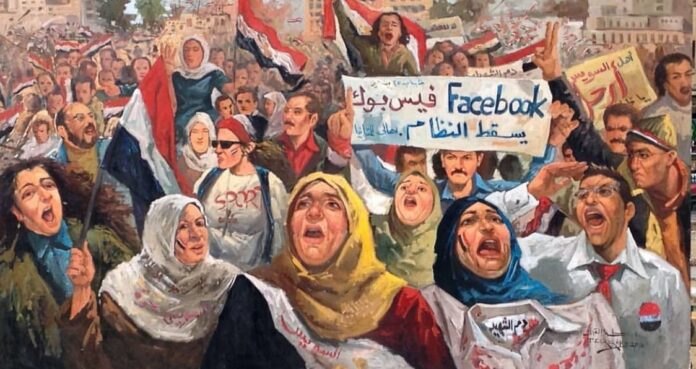 The revolution of January 25 was not completely buried and as a result of rain on a sea of boiling oil, Egypt still bears the burns.

A Ten years after the Egyptian revolution of January 25, 2011, it is spontaneous to exhume the frenzy that animated the revolt by taking stock of the current situation. Egyptian’s opinion about it is conflictual. Among them there is who, on the front line in Tahrir Square, do not forget the values for which they protested, and sees quite the opposite in today’s presidency of an “upgrade”, and who, on the other hand, is skeptical of the remembrance of the revolution, find solace and satisfaction in the head of state Abd al Fattah al-Sisi.

“Anything you could think of was bad.” This is Yousuf’s[1] statement, supported by Wael Ghonim’s[2] speech[3].
“It wasn’t a bug in the system, I think it’s comparable more to a system that had too much data and ended up crashing.”        An “overflow” says Yousuf recalling the moments shortly before the outbreak of the revolt.
It is undoubtedly ironic if we think that the revolution of January 25 is also called the “revolt of the Nile”.
This time, however, the Nile does not overflow with silt, but over 50,000 demonstrators in Tahrir Square.
“Tahrir Square welcomed everyone, Tahrir Square was man and woman, old man and child.” Says Ibrahem[4]

Freedom, justice, and bread were asked. Hosni Mubarak’s Egypt was exhausted and suffocated by 30 years of totalitarian regime that went hand in hand with police brutality and corruption. “One of the reasons why we took to the streets was also because Mubarak wanted his son to succeed him, it seemed a point of no return,” says Fatime[5], “it was everyone’s problem, in the revolution they protested for every single right trampled on. It was a moment of glory for us women too. “To conclude.

The vanguard of women

Like the men, the Egyptians faced violent police responses, namely: bullets, gas, and humiliation. Egyptian women took to the field for something more: visibility. Before January 25, the political rights of women were not in any way comparable to those of men. The presence of women in government apparatuses was purely symbolic, as evidence of this, an IPU[6] report that places the percentage of women in the Egyptian parliament at 1.81% in 2005, which will reach 13% and 15% following the elections of 2010 and 2015 with the reinstallation of the gender quota. Even at the economic level, the imbalance between men and women is significant. In 2014, unemployed women were 24% compared to 9.8% of men. According to a 2010 report by Human Development, 37% of illiterate people in Egypt were women. It is therefore clear that Egyptian women had hot spirits and that they saw a glimmer of light in the revolution.

But how was the revolution experienced by women?

Being a girl and a protester “They did everything to humiliate us,” says Fatime. “I made a deal with my mom. When I realized that things were going badly, I would go home ”.

In March 2011, during the demonstrations in Tahrir Square, 18 girls were arrested for the “virginity test”. Samira Ibrahim[7] was the first woman to report the act they suffered, facing a series of losses including work and dignity. The most used and effective method to silence a woman is the invasion of her physical intimacy and, although sexual harassment is a felony and a crime within the meaning of Article 306 (a)[8] and 306 (b)[9] of the Egyptian Criminal Code, it happened, but passed for “test of virginity”.

“And after the test he said to me:” Come on, sign here that you are a virgin “

Among the Egyptian authorities, initially declared alien to the practice, an anonymous general confirmed the incident in defense of the allegations of sexual violence

“These girls had camped in tents with male demonstrators in Tahrir Square, and in the tents, we found Molotov cocktails and drugs”[10] declares the military to CNN.

Samira Ibrahim indicated Ahmed Adel as the doctor responsible for the test, who was acquitted in 2012 following the legal action brought by Samira for contradictions in the statements of the witnesses.

The Internet played a major role. Through social media, Egyptians connect and form a herd, breaking down the rock of fear. “I was not alone thinking of a better government, there were so many people like me out there,” says Fatime, “The revolution was an exploit after a crossroads of news of aberrant[11] acts carried out by the regime[12]: we were tired” she ends.

Precisely because the internet had become a launching pad for organizing new protests, Mubarak’s Egypt turned off the internet. The government, therefore, blocks the four main operators offering access to the network. Despite the Mubarak government denying the decline in Facebook access is significant.

“Social media played an immense role. They were also banned for a while, I also remember that through the TV they tried to hide what in English would be called “elephant in the room” as they kept saying that nothing was happening and that the videos were photoshopped, which also became a ” Meme “confirms Yousuf.

After the 2013 coup by the army then led by General Abdel Fattah Al-Sisi, the views of the Egyptian people on the current government are varied and manifold. There are those like Hamid[13] who support the Sisi government, “I like Sisi. He is not an extreme Muslim, and he is from the army. Egypt must have a military president due to its political and geographical position. “

According to Al Jazeera, on the other hand, Abdel Fattah Al-Sisi is building a regime of oppression through coercion, for example by prohibiting unauthorized protests. Asked by Scott Pelley if he had himself given the order to attack the 800 Muslim Brotherhood demonstrators in Rabaa Square[14], President Abdel Fatta el-Sisi replies: “Let me ask you a question. Are you following the situation in Egypt closely? Where do you get your information from? There were thousands of gunmen in the sit-in for more than 40 days. We have tried every peaceful means to disperse them. “

“It is necessary to imprison those who may be potential terrorists or followers of the Muslim Brotherhood. The United States behaves in the same way by closing Twitter accounts when something does not suit them, ”says Hamid.

Freedom of expression is limited in the name of the fight against terrorism. On 22 September during the protests against the Sisi government social media and news sites were shut down. NetBlocks[15] technical measurements show a plunge in availability for Telecom Egypt and Raya following the release of videos exposing state corruption when Egyptian actor Mohammed Ali posted a video accusing the president of using millions of euros for housing. of luxury while the Egyptians suffered poverty. Despite this, former US President Donald Trump expressed his support for the Egyptian president. “Everyone has demonstrations, I don’t care,” said the president of the United States: “Egypt has a great leader”.

According to a report by Human Rights Watch, the authorities have blocked about 600 news, political, and human rights websites since 2017 and according to the Arab Network for Human Rights Information report in Egyptian prisons, which have increased since the Mubarak regime from 43 to 78, out of 120 thousand detained until the beginning of March 2021, 65 thousand are journalists, lawyers, doctors, in short, dissident citizens.

After 8 years from the beginning of his mandate, and precisely 6 after the interview left to the BBC[16] in 2015, Al-Sisi is still the head of state of Egypt, despite the legislation providing for a maximum of two terms of 4 years each. He himself in the quoted interview explicitly affirmed “There are one or two office terms at most, there is no third option. Nobody will be in power again against the will of the Egyptians. “

With the 2019 referendum, the presidential term was extended until 2024, two years longer than expected. Furthermore, the Egyptian president Al-Sisi will be able to reapply for a third time and remain in government until 2030. The question to ask is this: if therefore the “third option” is to be considered, will it be according to the will of the Egyptians?

[1] Invented name attributed to interviewee no. 1
[2] Egyptian activist, co-administrator of the page Facebook We are all Khaled Said who contributed to to trigger the Egyptian revolution of 2011. {cf. Wikipedia: https://it.wikipedia.org/wiki/Wael_Ghonim}
[3]“If we consider the facts, we see an Egypt that for 30 years has gone into decline, getting worse and worse. Everything was bad. We only excelled in terms of poverty, corruption, lack of free speech, absence of political activism. These were the conquests of our great regime “{Wael Ghonim, Speaking at TEDxCairo, 5 March 2011}
[4] Invented name attributed to interviewee no. 2
[5] Invented name attributed to interviewee no. 3
[6] 6 {cf. Inter-Parliamentary Union (IPU). , http://www.ipu.org/wmn-e/classif-arc.htm}
[7] https://www.youtube.com/watch?v=c29CAXR141s
[8] Article 306 (bis) (a) provides that persons who make sexual or obscene gestures in any way, even with modern means of communication, they will be punished with imprisonment of not less than six months or with the fine of EGP 3,000 (approximately US $ 419). Article 306 (a) (a) states that if the act of sexual harassment is repeated by the same person, the penalty of imprisonment will be increased to one year and the fine to EGP5,000-10,000 (approximately US $ 700-1,400). (Id.)
[9] Article 306 (bis) (b) states that if the harassment is committed with the intent to receive sexual gratification from the victim, the penalty will be imprisonment not less than one year and a fine of EGP 10,000-20,000. Also, any individual who uses coercion for receiving sexual gratification will be punished with a imprisonment between two and five years and one fine of EGP 20,000-50,000. (Id.)
[10] {cf. interview https://youtu.be/c29CAXR141s}
[11] Khaled Said, 28, beaten to death and left lifeless, he is one of the many victims of brutality of the police
[12] https://youtu.be/WqJyJSpWkrw, https://youtu.be/PBQJydEF9Rc {cf. Al Jazeera report, August 10, 2007
[13] Invented name attributed to interviewee no. 4
[14] “What El-Sisi calls” measures to restore the security “include the massacre of at least 800 supporters of the Muslim Brotherhood in Rabaa square of Cairo. In August 2013, after weeks of protests, Egyptian forces intervened. Among the survivors was Mohamed Soltan, the American Egyptian imprisoned for reporting news false. Soltan was released 21 months later the intervention of the Obama administration. ” [cf. interview with Abdel Fattah Al-SIsi at 60Minutes with correspondent Scott Pelley year 2019}
[15] https://twitter.com/netblocks/status/1175815065607 528449
[16] https://youtu.be/KqVPxafKmak