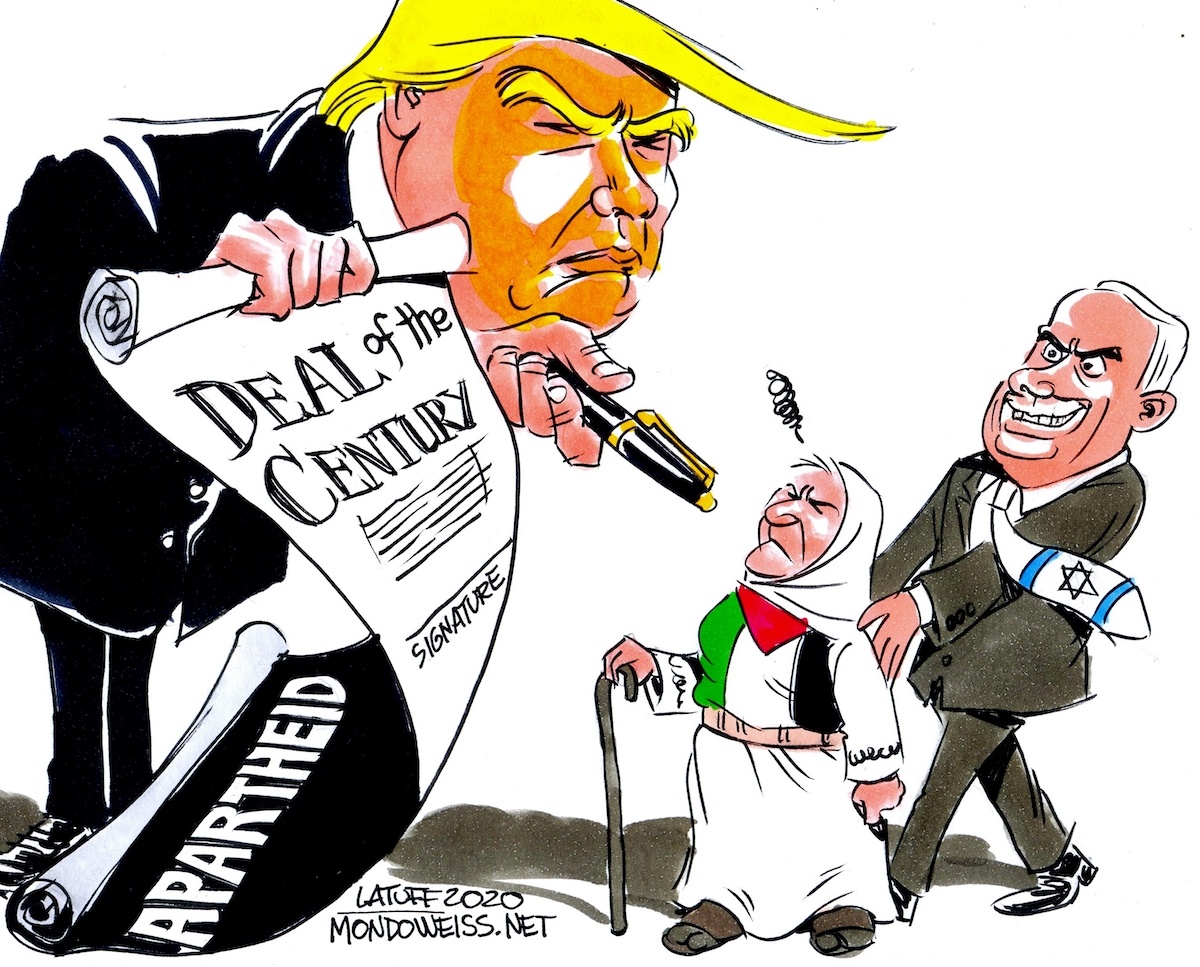 After a very long wait – as president Trump was already praising a final deal to end the conflict between Israel and Palestine during his presidential campaign in 2016 – the Trump-Netanyahu fanfare revealed itself in what is a clamorous foretold failure.

The “deal of the century” was kept secret till late January 2020, even though president Trump called many times for its revelation during the years. Meanwhile, he addressed the conflict with a clear unbalanced attitude focusing – conspicuously- only on Israeli interests. The Trump administration has effectively ousted the United States from the role of mediator abandoning the dialogue with the Palestinian leadership, blatantly ignoring its concerns and interests, instead embracing the Israeli far-right agenda with enthusiasm.

The events of 2018 were clear: the transfer of the United States Embassy to Jerusalem; the closure of the consulate in East Jerusalem, (which used to maintain relations with the Palestinian counterpart) and its “fusion” with the Israeli embassy; the drastic reduction in refugee assistance programs, in particular, the United Nations agency UNRWA which has suffered cuts of up to 40%. Trump justified Washington’s withdrawal in the funding contribution as a way to “solve” once for all the refugees issue, which according to both, Netanyahu and Trump, should be tackled by the definitive integration within their current host states[1]. This, notwithstanding many warned president Trump that this decision would also impact massively on the stability of countries where refugees reside, outside the Palestinian territories such as Jordan and Lebanon[2]. At this regard, Washington has thus demanded Jordan to naturalise Palestinians with a refugee status[3].

And if that weren’t enough,  Trump declared legal the acquisition of the lands occupied in the settlements of the West Bank (theoretically illegitimate)[4]; the recognition of Israel’s sovereignty over the Golan Heights[5]. To finish, the Trump administration does not seem reluctant even to grant the whole West Bank[6]. Already, a few days before the Israeli elections in 2019, Netanyahu reiterated his promise: thanks to American support he prevented the creation of a Palestinian state by “controlling the internal area” of the West Bank[7]. The plan was supposed to be revealed during summer 2019, soon after the holy month of Ramadan, that sees the vast majority of the Arab society striving to do a collective effort. The 2nd of May the top-head of the Jordanian intelligence was replaced together with some figures very close to the Royal House, including the personal adviser of the sovereign Faisal Jibril Al-Shoubaki[8]. The official reasons never came out,  it seemed that there was aim at destabilising the Hashemite Kingdom[9]. Shortly after the Trump-team reiterated the idea of creating a Palestinian confederation with Jordan whereby the country would have been in charge of protecting the borders whilst Gaza being under the Egyptian responsibility[10].

In mid-May, within the promise of tens of billions of dollars of foreign investment as part of the Middle East peace plan, the Trump administration announced an “economic seminar” in Bahrain. This seminar was expected to be held in June showing to Palestinian entrepreneurs the potential they will achieve with the phantom American proposal. The main Palestinian businessmen dismissed the event as a counterproductive insult.

The 24th of September President Trump was accused of abuse of power and the procedures to his impeachment started[11], while in late November the investigations against Benjamin Netanyahu (started in 2016)  resulted in an official charges for breach of trust, accepting bribes and fraud[12].

Suddenly the “Deal of the Century” was delivered to the world once for all.

What is the plan about?

The final document composed of 181 pages states that the Oslo accords and the two-state peace solution, are not anymore an option.[13] The main message of the Trump administration to the international community, and to the Palestinians in particular is that Israel has won the Israeli-Palestinian conflict and Palestine will never be a sovereign state[14].

Being this “peace agreement” based on precise conditions dictated by Israel it is of course refused by the Palestinians. There are four main key-points: first, Israel maintains Jerusalem as its sovereign undivided capital, whilst Palestinians will also be able to proclaim Jerusalem as their capital: but in Abu Dis, an ancient village in the remote suburbs of Jerusalem. Which is like saying that Sesto San Giovanni is Milan[15]. Second, Palestinians get no right of return; third, the borders between Israel and the West Bank will be redrawn – annexing the Jordan River Valley, a fertile area representing about the 30% of the Palestinian West Bank, in exchange for small desertic area in the Negev near the border with the Sinai equal to the 14% of Israel adjacent to the Gaza Strip[16]. The settlements – and its annexation – are illegal under international law. The last and fourth point, is the creation of a “state” for the Palestinians whereby they do not regulate the control of borders and on which total demilitarization is imposed. To call it state is also an euphemism, as it would be constellated by Israeli settlements.

The plan also includes, investments of 50 billion dollars in the occupied countries, there’s no how and where these funds are invested and no reference to the humanitarian collapse in the Gaza Strip nor to the poor freedom of movement of Palestinians in the West Bank[17]. Moreover, the entire final agreement will be negotiated over a four-year period, meanwhile, the Israelis are formally committed, albeit without any kind of concrete constraint, to freezing any new construction of settlements in the occupied territories[18].

The US president spoke of “the last chance for peace not to be missed”[19], but referring only to the Palestinians. In a nutshell, it is clear that the US President’s vision emphasizes and celebrates Israeli security needs whilst sacrificing Palestinian rights to self-determination. In this perspective, it is easy to understand the Palestinian choice to boycott this initiative. However,  as Ugo Tramballi underlined, it might have been more fruitful for the Palestinian authorities to show up and discover the cards discussing the 181 pages[20]. Saying no in advance, even knowing that the mediator is not super partes, does not bring any advantage.

How did the Arab and international world react to the Trump’s solution?

The disclosure of the Peace Plan fell into a very irksome moment for both Netanyahu and Trump. The Israelis will vote the 2nd of March for the third time in a year after Netanyahu has been indicted for corruption. In the U.S. Trump has been under the impeachment procedures and heavy revelations of his former national security adviser John Bolton filtered[21]. The peace plan is suspected by critics of being an electoral pact between the two leaders rather than an accomplished peace strategy[22].
Once again the European indecision leaves dismayed. The EU high representative Josep Borrell asserted  that he will work with Israelis and Palestinians for a negotiation within the parameters of international legality – and presumably in the framework of ​​the two states – but there’s no idea if the starting point would be the Trump plan or a new EU own initiative[23]. Single states boosted Trump support as the UK[24], which was counterbalanced by the silence of France[25] and Italy[26] whilst Germany recognizes the Trump plan as an historical opportunity to relaunch the peace process[27].

Are the Arab countries thinking that the Deal is “the slap of the century” as Mahmoud Abbas called it? The UAE and Saudi Arabia are asked to contribute for the economic burden and guarantee the financial sustainment aimed at developing the Palestinian territories[28], other countries are afraid of becoming their “collateral victims”. It is important to bear in mind that the plan could have repercussion in the whole region. In sacrificing long-lasting Arab partners as Egypt and Jordan, Washington is putting at risk the regional stability. Amman coldly accepted the American proposal, of being the custodian of the sacred places of Islam in Jerusalem, seeing in this task more pitfalls than opportunities[29]. The Hashemite Kingdom fears that this deal will represent a green light for Israel’s unilateral annexation of the Jordan Valley. Secondly, the delicate issue of Palestinians within and outside the Kingdom is also under discussion. A similar analysis also applies to Egypt, which despite having saved its territorial integrity, it is not clear what would earn from supporting a deal that may have blurred repercussions. Last but not least is the case of Lebanon, with which Israel has never signed a peace agreement and the relationship between the two countries are very tense.

In conclusion, it is already clear that peace between Israelis and Palestinians is still far away. As Noa Landau from Haaretz points out: “the agreement of the century appears to have been written in such a way that the Palestinians could do nothing but reject it. And maybe that was the plan”[30].

[23]Beth Oppeneheim. “The EU’s response to Trump’s peace plan has been pitiful – it is time for the bloc to speak up”. The Independent. February 10, 2020. Link: https://www.independent.co.uk/voices/trump-israel-palestine-peace-plan-kushner-eu-josep-borrell-a9326676.html

[30] Amir Tibon and Noa Landau. “Trump’s ‘Deal of the Century’ Was Written in a Way So the Palestinians Would Reject It. Maybe That Was the Plan.” Haaretz. January 27, 2020 Link: https://www.haaretz.com/israel-news/.premium-trump-s-deal-of-the-century-was-written-so-the-palestinians-would-reject-it-1.8443677