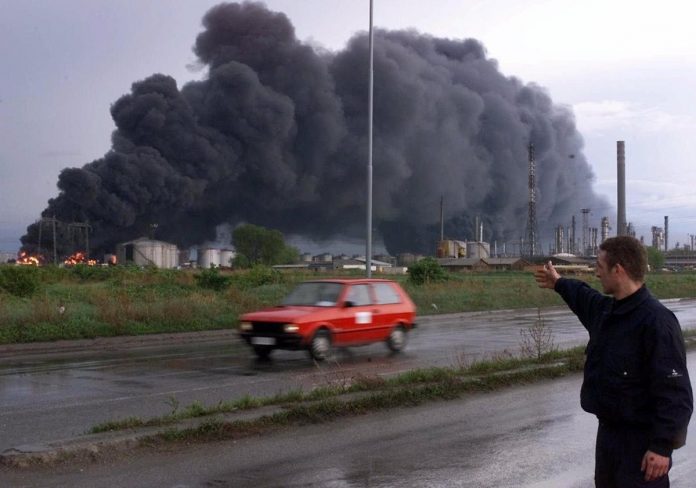 The 78 days NATO’s Operation Allied Force bombing campaing collaterally provoked severe damages to the local environment in the Federal Republic of Yugoslavia, and particularly to the industrial complex of Pančevo and the Danube watersystem. Nonetheless, the NATO coalition was not found in contravention of the international humanitarian law provisions concerning environmental protection.

Following the Yugoslav government’s failure to agree and to sign the American-drafted peace accord for Kosovo,[1] the “low-intensity internal conflict” in the Federal Republic of Yugoslavia (FRY) rapidly turned international once the North Atlantic Treaty Organisation (NATO) became involved.[2] In particular, on 24 March 1999 NATO forces led by the United States engaged into a military action against Yugoslavia through a 78 days bombing campaign which became famous under the label of  “Operation Allied Force”.[3] Such large-scale air campaign was meant to destroy Yugoslav targets, including industrial complexes and infrastructures; however, it was incidentally responsible for significant damage both to the natural and non-natural environment, and had a long-lasting adverse impact on the well-being of the local civilian population.[4]

Unlike the Vietnam War and the 1990-1991 First Gulf War, in which the environment resulted to be a direct and deliberate target of armed attacks, NATO’s military campaign in FRY and particularly in Kosovo provoked damages to the environment only in a collateral manner. As a matter of fact, power and chemical plants and generally factories were considered to be strategic targets from a military perspective; nonetheless, severe injuries to the natural environment were ascertained in specific areas – or “hot spots” – by UN experts called to examine the outcomes of NATO’s Operation Allied Force campaign in Yugoslavia during 1999.[5] Notably, the Serb areas of Novi Sad, Bor and Pančevo figured among the most damaged towns, with the latter being considered in the Final Report to the Prosecutor by the Committee Established to Review the NATO Bombing Campaign Against the Federal Republic of Yugoslavia.[6] In fact, the 80,000 inhabitants industrial complex of Pančevo resulted to be one of the most heavily targeted centers, and especially the bombing of a petrochemical plant, a fertiliser factory and a major oil refinery caused the release of numerous toxic chemicals and substances into the environment, either directly from the damaged facilities or as a consequence of fires. Accordingly, concerns about adverse impacts on human health and long-term harm to soil, groundwater and crops arose.[7]

Along these lines, being air-strikes targeted industrial facilities mainly located along the Danube River, apprehension for the possible environmental collateral damages on the system of waters similarly emerged. In fact, even though no evidence of an ecological catastrophe as a result of NATO’s bombing campaign was assessed, the conflict configurated a potential risk both for civilians in Yugoslavia and in downstream Bulgaria and Romania in terms of contaminated water and fishing population.[8]

In 1999, an action before the International Court of Justice (ICJ) was brought by the Federal Republic of Yugoslavia against ten NATO States involved in the bombing operations, namely Belgium, Germany, Canada, France, Italy, the Netherlands, Portugal, Spain, the UK and ultimately the USA.[9] As a matter of fact, the FRY had the sole possibility of filing a case against all the involved countries and not directly against NATO, provided that the ICJ only has jurisdiction to adjudicate over States. In particular, the FRY requested the Court to declare NATO air-strikes illegal and to order immediate cessation of the operation.[10]

The Court, however, immediately dismissed the cases against Spain and the United States, on grounds that it manifestly lacked jurisdiction on the matter; in 2004 the Court found that it similarly lacked prima facie jurisdiction also against the other eight countries. Therefore, NATO States could not be found liable for their actions and the lack of direct and indirect environmental protection with regard to the bombings during the conflict.[11]

As far as customary international law is concerned, NATO States’ bombing actions in Pančevo resulted to be subject to the principles of proportionality and necessity. In particular, the bombed oil-refinery and the petrochemical facility were considered to be military targets, unlike the fertiliser plant. Nonetheless, following NATO’s statements on the strategic importance of the industrial complex, no breach of the principle of military necessity in respect of the petrochemical and oil-refinery was assessed; conversely, harm caused by the bombing of the fertiliser plant was considered mere collateral damage.[12]

As regards proportionality, the significant amount of pollutants released would have to be considered in light of NATO’s anticipated military advantage. However, the Final Report to the Prosecutor by the Committee Established to Review the NATO Bombing Campaign Against the FRY merely expected NATO’s military advantage to be “very substantial”, without precisely defining the degree. Therefore, due to the lack of knowledge of the exact military advantage expected, the Committee did not recommend further investigation into the matter.[13]

In parallel, while the conflict was still in progress, Yugoslavia brought the issue of environmental damage during the conflict before the International Criminal Tribunal for the former Yugoslavia (ICTY). In particular, the Office of the Prosecutor established an investigative fact-finding Committee to assess whether NATO forces committed war crimes during the conflict, including the bombardment of Pančevo. In the case at issue, the Court initially examined whether the harm satisfied the cumulative threshold of “widespread, long-term and severe”, envisaged by articles 35 and 55 of the 1977 Additional Protocol (I) to the Geneva Conventions.[14]

First of all, it was reported that toxic clouds spread into an area of 15 Km2 for more than 10 days; furthermore, acid rains were recorded in the neighbourhoods. The issue of transboundary water pollution was similarly examined, being the Danube an international watercourse.

When it comes to the assessment the possibility of a long-term damage, despite having documented biodiversity loss in the surrounding bombed areas and adverse effects on crops, soil, groundwater and human health, the environmental harm was considered not to amount to a natural catastrophe, thereby not resulting in long-term ecological consequences.[15]

Eventually, in relation to the severity criteria a significant amount of toxic substances were assessed into the water, soil and atmosphere of the Pančevo industrial complex by the Regional Environmental Centre (REC), including mercury, propylene and hydrochloric acid.[16] However, in the end no evidence of an ecological catastrophe for the Danube as a result of the bombings and the lack of a precise clarification of the parameters defining a “severe harm” brought to the conclusion that the environmental damages committed during the war could not amount to the severity envisaged by the 1977 Additional Protocol I.[17]

In light of this, based on the available facts and findings of the Regional Environmental Centre (REC) and the Balkans Task Force (BTF), the environmental injuries only configured as widespread, though not reaching the Additional Protocol cumulative threshold of long-term and severe. As a consequence, NATO States which at that time were already part of the Protocol (with the exclusion of the US, Turkey and France, which were not bound by the treaty) were not found in contravention of articles 35 and 55.