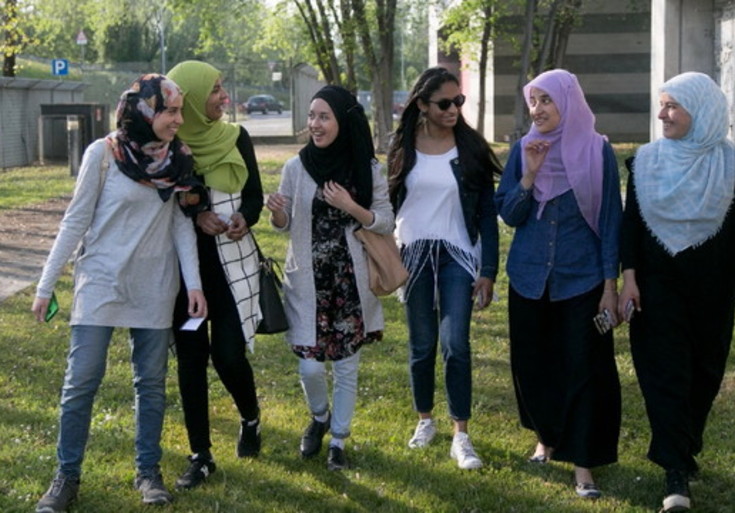 The new study in Italian (L’Islam Italiano, un’indagine tra religione, identità, e islamofobia) Published by Meltemi publisher, Italy (2019) for Fabrizio Ciocca, an Italian researcher in political sociology and the migration phenomenon, with a special focus on the Muslim community in Italy, is an important addition to the field of studying Muslim communities in Europe from inside, through an empirical methodology searching for a clear and reasonable analysis of the realistic situation of Muslims in Italy.In which Ciocca is investigating key factors in the scene in order to highlight new perspectives for dealing with the problematic issues of the Muslim community in Italy concerning the public debate.

While this study interacts with his previous ones, it is dedicated to present and analyze his conducted survey based on 15 questions elaborated to cover the relations of Muslims with their religion, Italian society, and with Islamophobia, using the platform of Facebook to contact over 300 anonymous Muslims in Italy.

What gives this study a special importance beside being an updated recent addition to the field concerning Italy in particular is its inside contact with the community, through a good access to the social canals in a private and public mode, explaining the objectives of the survey to be familiar and acceptable to individuals, in which Ciocca is intending to give the community itself the voice to express their concerns and opinions. In other words we can notice that he could overlap the barriers with the studied community, which is usually considered as a challenge for researchers during empirical methodology, when they need to conduct a survey or interviews. Ciocca has combined between both; as he interviewed a number of active people in the Muslim community about their opinions on the results of the conducted survey. Even though some of the interviewees’ opinion do not agree with the clear analysis of the survey (P. 103 – 106) Ciocca has demonstrated the whole scene to give the reader the right to read all what his empirical research has brought, which can be a point of strength to the credibilty and neutrality of his research.

Ciocca has built his study in a simple and logical sequence of five chapters preceded by an introduction and followed by a conclusion.

In the first chapter (P. 29) he explained the socio – demographic aspects of the Muslim community in Italy based on recent statistics and analytical studies, to conclude with estimated number of two million and a half Muslims in Italy, including one hundred thousand converted native Italians. Ciocca has given attention to criticize and explain the difficulties facing the adopted methodology in estimating the number of Muslims in Europe in general based on the percentage of Muslims in the country of origin, therefor its limitation on immigrants only, beside the lack of statistics concerning the religious affiliation of people in Europe in general.

While in the second chapter (P. 41) he well explained his methodology in proceeding the survey, from the start beginning and elaborating the three main key factors to investigate, until his access to individuals through Facebook and Google drive platforms. He presented the description of the participated individuals in his investigation, according to questions in the survey itself regarding their citizenships, their ages, and their level of education. Despite the limited number of the participated individuals in the survey according to statistics standards, I do agree with Ciocca that it is still considered a starting point for related future researches. And I would add to consider his methodology as a recommended model that could be expanded to meet precise results.

The third chapter (P.51) is the main chapter of the study, where Ciocca has presented the results of the survey, with his in-depth analyses to the three investigated issues: the relation with the religion, with Italian society, and with Islamophobia.

He did not miss to benefit from the experts in the field on the national level, like Stefano Allievi, and Renata Pepicelli, to support several points of view he reached. Beside presenting compared numbers concerning the same issue in order to help the reader to understand the vision of the results from its different aspects.

Starting with the relation with the religion, the concept of Identity is strongly connected in understanding the meaning of being a Muslim in Italy, to explore other dimensions of this relation with the religion. As a matter of fact the question of Identity is a relevant issue all over the studies about Muslims in Europe. Which can refer to individuals more than to religion, translated by being an Italian, British, or French Muslim for example, which reflects the realistic situation of people belonging to a specific nationality, and to a determined religion at the same time. Therefore, in this context I would say that the question of identity is related to the term of Italian Muslims more than Islamic Italian.

While in investigating the relation with society, Ciocca has highlighted this relation through its two directions, giving importance to the obstacles that Muslims in Italy are facing in normalizing their relation not only from the social aspect for individuals, but also from legal and institutional perspectives to Muslims as a whole community.

In the third investigated issue, Islamophobia, the reasons and motivations of this phobia were given a specific attention, and confronted with the daily life of Muslims facing challenges under this issue, especially women in hijab, where the threat is reaching 70% in their case.

Then the fourth chapter (P.99) was dedicated to present the interviews with a number of Muslim activists in Italy in different aspects of life, as an attempt from Ciocca to read the results of the survey through the eyes of Muslims themselves. This can also be an addition to the methodology in investigating the related issues, especially when he gave the reader the right to compare different points of view of Muslims concerning the same question. Nevertheless, the credibility and the neutrality of the study from a scientific research point of view is based on the survey, since it deals with numbers not names.

In the last chapter (P. 113) Ciocca has presented and evaluated three important and different experiences in dealing with Muslims in Europe: The French, the British, and the German experience. He compared the three experiences, especially regarding the chosen methods and policy followed by the states to govern Muslim minorities, where the reader can understand the particularity in each experience related to the system of the state itself, and its vision to the nature of the presence of Muslim minority on its territories .

The study was introduced by Antonio Cucinello, an Italian expert researcher in Arabic and Islamic studies, to reflect on the value of this study, regarding Italy in particular, and Muslims in Europe in general with a wide spread of stereotypes and prejudice towards a community that has become by now part of the European national communities themselves.

In conclusion, this study is dense and well-articulated in an easy sequential presentation in front of a reader seeking knowledge in problematic and complex issues in the field. Even though it is basically constructed to present and analyze a survey, it in reality goes beyond by understanding the related circumstances socially, legally, and statistically. Its approach is simple, central and neutral. And it has highlighted updated serious perspectives in dealing with sensitive concerns in Italy.