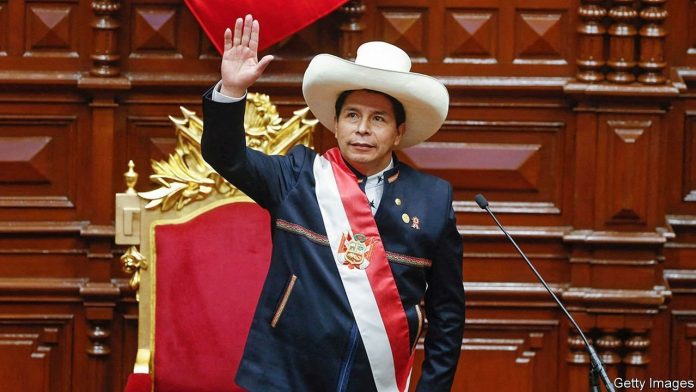 Prospects of the challenges and opopportunities that the rural school teacher and union leader would face as president of Peru.

Peru celebrating its bicentennial this year, home of the historic Inca Empire, its territory and political organization was the backbone of the expansion of Spanish colonization in South America, just like Peru was one of the foundations for the domination of the region, it has also been (and is called to be) one of its axes of liberation, at the beginning of the 20th century Raul Haya de la Torre and his APRA not only preached for the Peruvian popular causes, the Patria Grande concept was also one of its main slogans, regionalist preaching that would have great influence on contemporary and later movements (such as Peronism in Argentina).

But like other countries in the region a couple of years ago (especially the outbreaks against the neoliberal structures of 2019), political instability seems to be one of the main trends, now coupled with economic and health pressure, caused and aggravated by the Covid-19 pandemic crisis.

Castillo´s success among the electorate was based on his political image as an “outsider”: a humble and charismatic provincial school teacher who has a strong support in the country’s Hinterland.

What challenges and opportunities would Pedro Castillo face as president of Peru? He would take office having a complex scenario:

A society shocked by the economic and health crisis of Covid-19, a society polarized in various cleavages (the coastal zone vs the Peruvian hinterland, Lima vs the interior country, urban areas vs rural areas), a recent history of political instability, a considerable opposition in the Peruvian parliament.

In such a scenario, the first years of Castillo’s government (until he gains greater parliamentary support in the next general election) would be marked by moderation in his government’s objectives, but having the dilemma to demonstrate to his electorate and the rest of the Peruvian society a transformative vocation, a political model different from its rivals, the main reason for which he was elected.

The regional and international scenario that Castillo will face will also be a challenging scenario:

A global and regional map still shocked by the economic and health crisis of the Covid, a stage of geopolitical transition with friction between the West and the East and their adjacent areas, with a renewed strategic competition between great powers (China vs the United States).

But also Castillo could find good support at the regional level for his government abroad, with Argentina (Alberto Fernandez) and Bolivia (Luis Arce), a possible new government in Chile, and the opportunity for Lula da Silva (or a candidate with similar positions to Lula) to win the presidential elections in Brazil in 2022. Such a regional scenario could be a great opportunity.