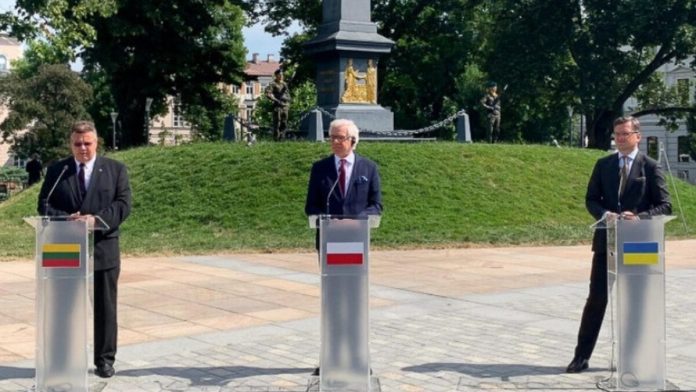 28th July 2021, the Ministers of foreign affairs of Ukraine, Poland, and Lithuania – Dmytro Kuleba, Jacek Czaputowicz, e Linas Linkevičius – have announced the birth of the so-called “Lublin Triangle”, a format of regional cooperation which sees the three countries of the middle eastern Europe to pursue economic, cultural, political e military common goals. This regional cooperation forum, recalling an old-fashioned Polish–Lithuanian Commonwealth style, aims to strengthen the cultural and political ties of a shared common past between those people.

The Lublin Triangle is not the only one example of regional cooperation interesting the middle and eastern Europe region. The polish diplomacy is committed to trace a line of conjunction from the shores of the Baltic Sea to the Black Sea, from Warsaw to Kyiv. The reason of the proliferation of regional organizations, whether it is economic, political, social, cultural, or military cooperation, concerns the aim of strengthening the eastern flank, demonstrating a high degree of cohesion toward the assertive posture of Moscow. Poland, Ukraine, Romania e Lithuania, at different ways, are concerned about Russian interferences in their own domestic and foreign policy. Those countries aimed to send a clear message to Russia, as well as to EU and NATO: Unity is strength.

This new forum sponsored by Warsaw, Kyiv, and Vilnius, should respond to a double goal. It is meant to strengthen the role of the central and eastern region of Europe on one side, pursuing a major cohesion and political cooperation among the states on the Eastern Flank to respond to the Russian threat. To promote the integration of Ukraine into the EU and NATO framework on the other hand, ensuring an effective support to the principle of integrity of the Ukrainian territory, with reference to Donetsk and Luhansk regions. In addition, they have denounced the illegal Russian occupation of Crimea.

Dmytro Kuleba, Minister of Foreign Affairs of Ukraine, on Twitter has affirmed: “One year ago, on this day I was in Lublin, with my Polish and Lithuanian colleagues we created the Lublin Triangle to bring closer three allies – Ukraine, Poland and Lithuania. We joined forces to ensure freedom, security and prosperity of our nations and our region between the Baltic & Black Seas” and continues: “The Lublin Triangle is proud of the common past, clear-eyed about countering current threats and resolute when it comes to defending our Europeans and Euro-Atlantic future from aggressive neighbours”.

Signals of an intense military cooperation among those states can be observed in the participation of four F-16 jets of the polish Air Force during the military parade held in the streets of Kyiv on august, on the occasion of the 30th Ukraine Independence anniversary as reported by PolskieRadio.[1]

The Lithuania-Poland-Ukraine multinational brigade represents another example of military cooperation, known as LitPolUkrBrig, composed by more than 4000 units, which obtained the full  operative capability on 2016, and was meant to pursue a common security strategy. In addition, it represents the first step of Ukraine towards the NATO membership. On July 17th-30th, took place the joint drills nearby the Ukrainian town of Yavoriv, near Lviv, dubbed Three Swords 2021, with the deployment of 1200 soldiers and 200 vehicles of the LitPolUkrBrig, which have seen the participation of the United States.[2]

Due to the historical, linguistic, and cultural connections, Warsaw has prepared the ground of its diplomatic mission in the East Europe. We have already mentioned the so-called “Ostpolitik”, which highest expression is represented by the Visegrad Group and the Eastern Partnership[3] (EaP) – a Polish-Swedish initiative which aims to bring closer Armenia, Azerbaijan, Belarus, Moldova, Georgia e Ukraine to the EU.

Remarkable examples of the polish foreign policy in the so-called “gray zone” – this term is meant to define those post-soviet states which are not (or not yet) part of UE and NATO – are two regional cooperation initiatives, the Bucharest Nine (B9) and the Three Seas Initiative (3SI).

The regional security cooperation format, known as Bucharest Nine[4], started by the common vision the Romanian President Klaus Iohannis and the Polish President Andrzej Duda, based on a joint proposal during the Central-Eastern Europe states, held in Bucharest in November 2015.

This initiative represents the Polish-Romanian purpose to strengthen their bilateral cooperation and to intensify their effort toward the respect of NATO standard of the 2% of GDP as defense expenditures, rather than to promote the East European states membership in the Euro-Atlantic framework.

To ensure the security and stability of the region between the Baltic Sea and the Black Sea, Bulgaria, Czech Republic, Hungary, Estonia, Latvia, Lithuania, Poland, Romania, Slovak Republic, have intensified their commitment to create a special regional cooperation security strategy aimed to support NATO operations at regional level.[5]

The Three Seas Initiative[6] originates from the political cooperation of the Romanian President Klaus Iohannis and President Andrzej Duda, during the Dubrovnik Forum in 2016, where was illustrated the proposal to create a North-South cooperation axis, by which connecting three different shores: the Baltic Sea, Adriatic Sea, and Black Sea.

The Croatian President Kolinda Grabar-Kitarović launched the proposal to gather President Duda’s goal to intensify the multilateral cooperation alongside the region comprised among the three seas. The above-mentioned B9 member states have already adhered to the 3SI, together with Austria, Croatia, and Slovenia.

Thus, theoretically both initiatives are meant to reinforce the Eastern Flank within the Euro-Atlantic frame (to contain the Russian threat), and to boost the cooperation among the East European states on one hand, and between those and the EU/NATO institutions on the other hand. The main goal of those initiatives is to intensify the support to the European integration and collective security projects.

Indeed, the purpose to align the political action of those states, strengthening the Eastern Flank, has received the endorsement by the EU institutions, and NATO officials.

Following the meeting of the leader of the NATO and B9 member states, held in Warsaw on June 2018, with a joint statement, has been expressed the idea by which “to guarantee the reinforcement of the NATO Eastern Flank is necessary to intensify the mutual cooperation”[7] to respond to the challenges that the Alliance will be called to address, from the cyber security to the deterrence of the Russian threat.

Showing themselves united and committed one another, the B9 leaders aim to persuade the Alliance to deploy a more consistent presence of NATO military forces on the Eastern Flank, particularly in Poland. Indeed, the goal of a strategic presence of allied armies on polish soil represents the keystone of polish foreign policy since the fall of the Soviet Union.

Accordingly, in that regard, the joint statement explains that: “The desired results of the dialogue with Russia will be achieved when Moscow returns to fully respecting international law and its international obligations and NATO deterrence, and defense is strong”.[8]

This regional cooperation forum, led by Poland and Romania, succeeded to establish an eastern flank Coalition within the NATO, as emerged during the NATO Summit 2018 in Bruxelles. Hence, due to the permeability of the EU/NATO members’ bilateral relations, this new Eastern Front could be translated in a strategic advantage for the European collective security – according to the enduring will to create an EU defence – otherwise it could represent a momentum of increased friction within the EU.

Despite their effort to foster a deeper East-West cooperation, within both EU and NATO, at the actual stage, B9 and 3SI have not gathered a wise consensus among western European leaders, as an important tool to strengthen the European institutional structure.

Nevertheless, despite the scarce attention that those organizations led by Poland and Romania have reached by the other European allies, B9 and 3SI have obtained an enthusiastic support by Washington, following the endorsement of former President Donald Trump, who joined the 3SI Summit 2017 in Warsaw, when he defined those initiatives as an “incredible success”.[9]

The US former President’s presence at the 3SI Summit in Warsaw has been considered as further attempt to foster ulterior frictions within the EU. Some observers have suggested that those initiatives could possibly represent a major advantage for the US interests rather that the stability of the EU. German officials, former Kanzlerin Angela Merkel in particular, have assumed that the 3SI could represent a risk for the unity of EU, as supposed by the Croatian Member of the European Parliament Ivan Jakovčić, who affirmed that this initiative could affect the EU’s stability and its geopolitical influence.[10]

Nevertheless, if this could be possibly accurate in the case of Poland, which Eurosceptic government have already shown to privilege the bilateral relations with Washington rather than with Bruxelles, Romania could represent a different example. Bucharest have proved itself as strongly committed to EU as much as to NATO. Thus, it is possible to assume that Bucharest considers both the B9 and 3SI as effective instruments to strengthen the EU-NATO cooperation and the East-West relations, rather than as a tool of political fragmentation within the Euro-Atlantic Alliance.

Risk of fragmentation and strategic advantage for collective defence are two side of the same coin. Despite those fears, we can possibly observe an increasing support towards new forms of regional cooperation following the emerging B9 and 3SI organizations, particularly due to the crucial role played by Poland and Romania in terms of European security. Indeed, both countries host the NATO missile systems of defence “Aegis Ashore”, which are deployed on the Romanian Air Force Base of Deveselu and of Redzikowo in Poland.[11]

Following the experience of the Eastern Partnership (EaP) and other similar initiatives[12], Poland and Romania have launched an intensive diplomatic cooperation with their neighbors to reinforce the EU and NATO eastern front.

At the actual stage, despite the NATO endorsement to the initiatives, as demonstrated by the official visit of Deputy Secretary General of NATO from October 2016 to October 2019, Rose Gottemoeller, at the B9 Summit in Bucharest in 2016[13], both B9 and 3SI have marginally improved the stability, stability, and prosperity of the central-eastern European region.

However, could emerge a more significant prospective for the achievement of the EU and NATO objectives, whether Poland and Romania succeeded to capitalize on their potential soft power, based on cultural and linguistic affinity with non-member states, to pursue strategic interests. Warsaw could possibly pursue its historical diplomatic relations with Ukraine (and democratic Belarus); Bucharest could exploit its political influence and bilateral friendly relations with Moldova, Georgia, and other Transcaucasian states.

To open both organizations to the admittance of new members could represent the first step. Ukraine, Moldova, and Georgia, members of the Eastern Partnership (EaP), could be a clear example. Admitting those states into the B9 and 3SI organizations would represent those initiative as the engine of the Euro-Atlantic integration process of the post-soviet countries, and to strengthen the Polish-Romanian geopolitical position in that region.

In addition, B9 and 3SI could support both the NATO and EU missions and operations beyond their eastern border, reinforcing both Polish and Romanian security.

Differently, the Lublin Triangle and the LitPolUkrBrig, due to the Polish-Lithuanian diplomatic cooperation, succeeded to embrace the strategically important Ukraine, pointing out its deep integration in the Euro-Atlantic framework. Thus, the Lublin Triangle could prove to be an incredible political and military success, both for Warsaw, which would confirm itself as keystone of the Eastern Flank, on one hand; and for EU/NATO, which will increase its strategic advantage on Moscow.