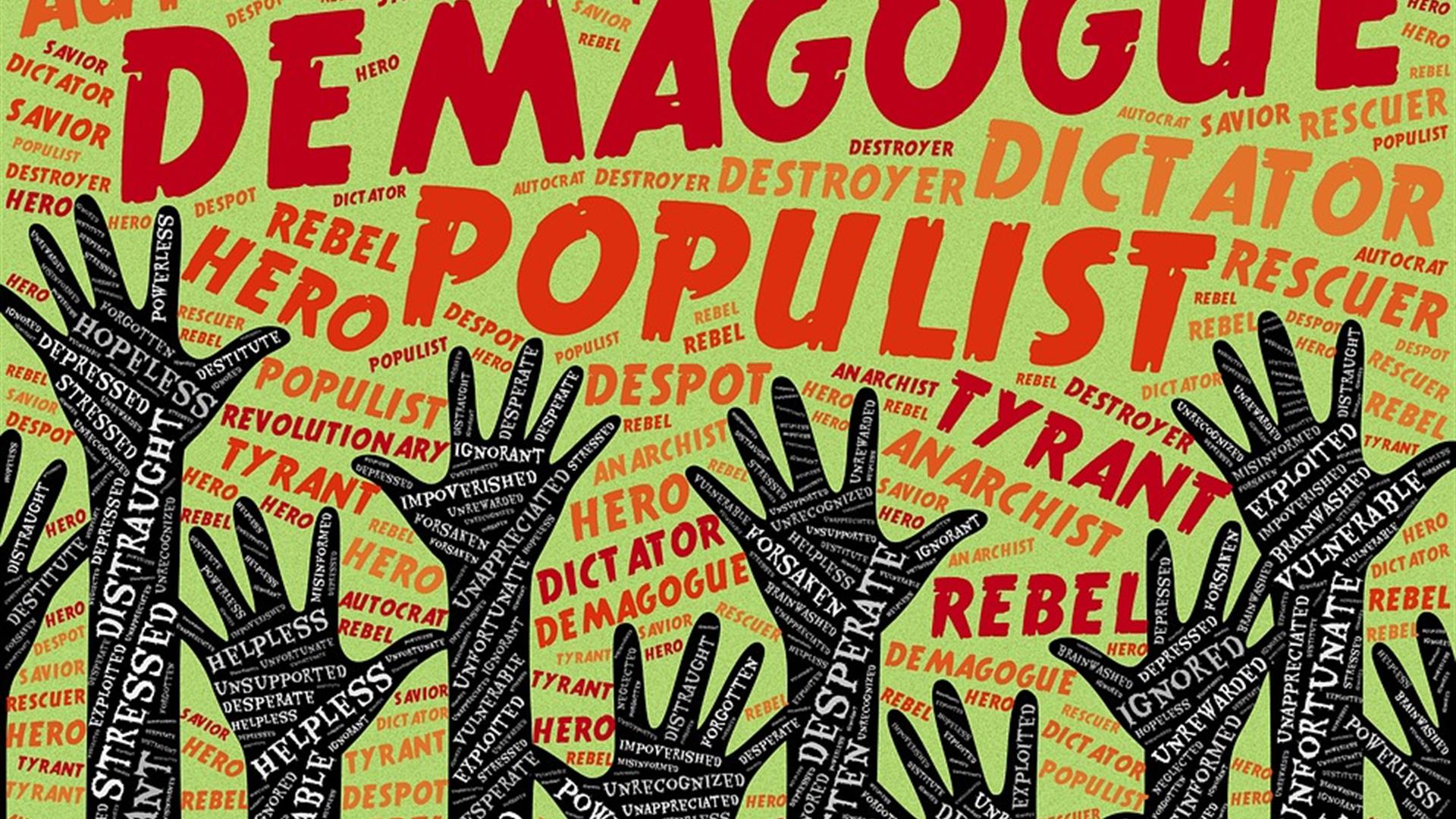 Is there any consciousness while is it talked about “populism”, even more? Only through a synthetic but successful view to the historic roots of the definition and both to its enduring reasons, it could be possible to portrait the “hidden-faces” phenomenon.

It is complex to provide a whole definition of the term “populism”, as much as to talk about “democracy” in general, but not pointing out those important differences between a “popular” democracy and a “liberal” one, thus involving a series of negative results.

The two terms (populism and democracy) are “in practice” related (as to say, they appear strongly similar by the “developing” moment from their theoretic definitions), and firstly in etymology, since they both contain a reference to the word “people” (that is the translation for “demos” in democracy).

Although this facile fact, to be the populism concept totally defined, “demagogy” would be a more suitable complement-term rather than democracy (in fact, it is talked about “demagogic” populism), and this will necessarily entail a new “logical” consideration. According to the “anakuklosis”(i.e “circular”) movement represented by ancient Grecian  political philosophy, demagogy would stand for the  moment of involution (precisely, the inevitable degeneration proper to every “pure” government form) that leads the “absolute democracy” regime  to a  “demagogical” one, or under “demagogues” leadership, who are “those ones able to conduct the people”.

This shift is remarkable, because if democracy means “power to the people”, or “the government of the people, by the people, for the people”[1], in “demagogy” people will be not a main character anymore, since it will be put in passiveness , under the leadership of “someone” else (actually the original composition provides the term “demos” + “ago”, this last standing for the verb “to conduct”, so that  “demagogue” indicates the people’s conductor role). Then it is easy to assign the populism to be a negative meant of democracy, whereby to be one of hers “degenerated aspects”, in force of its conceptual closeness to demagogy. It has been also metaphorical defined as a “congenital disease” of democracy, or like the growing up “tale” that damages the “good crops”[2]; otherwise by currently new definition, mentioning “demo-patia” , “demo-astenia” and similar[3].In addition, if “populism” can be indicate a latest way to spell “demagogy”,(maybe a modern variant of the same plague) it should be consequentially designed by new features, and either defeated by new “treatments”.

The term was born in XIX century’s Russia , with the purpose of indicating that political-cultural movement, socialist-approached, strongly related to the people (the original Russian definition was narodnicestvo, from –narod standing for “people”), and followed particularly by the peasants mass, which was deployed against modernizing changes (whom the Capitalist West-side was blamed of , through these advances and technologies that would make it a “world’s coordination center ”)[4] but conscious at once of the oppressive czarist regime, despite it was setting out to become a new one, (starting from the servants emancipation, in 1861) even founded on “social control”: it will be the soviet-issue, fiercely voted to industrialization matter (thence as well disruptive for rural life).

Instead, they suggest an alternative social model, focusing on traditional values of  rural communalism (whose symbol was the “obscina” institution, a Russian land typical community , formed and managed by the association of landowners families,  and disappeared since the collectivizing land reform, by 1928)[5], appearing arrears (if compared to the industrialized and liberalized West-side), but reported as the only way to escape from bourgeois emancipatory illusion, that was transforming the men in “human products” of capitalism, i.e the proletarian working-class[6].

Their aim, (positive, in some sense) pointed therefore to prevent the arrival of democracy as it was already looking in west-side Europe, namely a “western-polytheistic values” phenomenon that was leading the absolute power to prevail (effectively, this is what happened in Europe along XIX century, under floods of dictatorships and totalitarian regimes). So that they claim for comeback of “true” people in political scene (to say, the coming of the masses instead of bourgeois), through the advent of democracy with “entire-humanity” aspects (these last opposed to “individual” ones of contemporary life, dissolving social relationships), built on a unique natural-law foundation, inspired to Russian peasantry world.

Even with these “nobles” purposes, what can be named as a “populist overhaul of democracy” did not influence so much  Russian politics (where indeed bolshevism and Soviet Union will make the change, opening doors to modernization, even in conflict with original populism), and it can be noticed in the replacement of the Slavic original definition (narodnicestvo) occurred in the course of ‘900, by the new Anglo-saxon one of “populism”. This latter will be used like a “common name”[7], generally referred to a party, a movement or also to a leadership or another sort of government, ever negatively connoted.

The passage to the Anglo-saxon context (the American, precisely) has not been casual: in 1891 in Cincinnati “People’s Party” had been created to gather mainly farmers reaction against the super-powered banks and the emergent economic system, this destined to pick up world’s dominance, though neglecting little landlords, who lived repressed under economic crisis (notably, there has been the “Great Depression” between 1870 and 1897), while opposed to the triumph of parasite billionaires’ greed and corruption.

On the other hand, the “American” version of populism arised in a society  looking completely different than pre-capitalized Russia: that was born democratic and predestinated to freedom, and it would not had renounced to individual determination such as it has prevented itself from the consequences of Russian bolshevism (as like as from continental Europe experience of totalitarianism)[8]. In political field, while the People Party’s adventure was already ending at the beginning of ‘900 (it faded away definitely in 1912), the populism, by the way, was going to assume a “neutral” and autonomous connotation (leaving also its basic socialist approach), used now to indicate that modernization “syndrome” perceived by the masses (in both cases mentioned , the farmers) when they tackle a hard historical transition. Onwards this main syndrome, a lot of minor diseases are propagated to impress other aspects of social life (from the economic to political, including judicial and cultural ones), till they manage to “erode” its structure completely, even starting from the inside.

That effect is due to the fundamentalist attitude typical of all forms of populism,basically referred to a unique creed, often relayed to national “identity”, not far to be classist or even racist (this class-focused issue can be denoted in Russian commoners’ experience, as well as in the American farmers’ contempt for emerging “melting pot” society. In addition, the “mythic exaltation” of the indigenous and ethnic heritage will be the prevalent rhetoric used by  Latin America populists during XX century[9]), whatever to cultural or religious customs (emblematically about, F. Zakaria gives an example in his book “Future of Freedom”, describing how nationalist current “Christian- socialist” founded by K. Lueger in Vienna fin de siècle  managed to raise maximum of the consensus, thanks to its equally use of socialist “rhetoric”, that attracted the working-class, and nationalistic principles, addressed to the peasantry class; finally his political “masterpiece” would be celebrated as “magnificent” in A.Hitler Mein Kampf )[10].

The masses, once that fallen into weariness and self-reference, (maybe they fallback, maybe they have been forced by external forces), they become easy preys of someone(the demagogues) who nourishes his power with their consensus (better to say, their abstention), by pretending to support people and being a “man of the people”, actually tricking them about their real role. This last in fact from a “sovereignty” position in democracy passes to the “instrumental” one in demagogy, all unconsciously.

[5] From the translation of obščina, by Enc. Online Treccani

[9] The XXth century has been the century of Latin American populisms, definetly. By these ones,  success arrived for charismatic leaders (from Vargas in Brazil, to Pèron in Argentina, to Cardenas  Mexico between the years ’30-’40, also Garcia e di Fujimori in Peru,   Bucaram in Ecuador and  Chavez for Venezuela, to denote only priciples among those of the post-War ),  whose policy appeared similar in disdainig liberal-democracy and its social model, to that they opposed a sort of “organic democracy”, referred to the “original people”  (mestizo, o el pueblo for bolivarian and ecuadorian leaders), and to its ancient  unity of values , against disjointing forces of the external and internal “enemies”.

The role of Jordan for peace and security in the Mediterranean