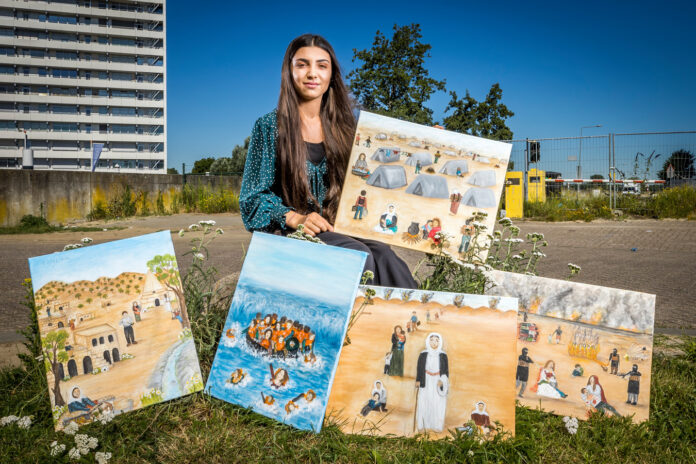 Yazidi is one of the oldest minority groups living in the North-Western part of Iraq. Since the 18th Century, Yazidi communities experienced more than 72 genocidal massacres, and systematic discrimination. Holya Khalaf through her paintings, managed to tell her story of discrimination and the overall violence suffered by Yazidi people living in Iraq.

Yazidi is one of the oldest minority groups living in the North-Western part of Iraq. Since the 18th Century, Yazidi communities experienced more than 72 genocidal massacres,[1] and systematic discrimination continued until the present: in particular, since 2003 Yazidi villages and temples have been repeatedly targeted, and in 2007 more than 800 Yazidi people were killed as a result of multiple attacks perpetrated during the American-led invasion.[2]

What is more, day-to-day marginalization is at the basis of the prosecutions throughout history: as a matter of facts, Yazidis’ cultural traditions are not recognized in Iraqi public schools, and negative stereotypes concerning Yazidi religion are continuously advanced, thereby contributing to even more marginalization and denial of equality recognition of minority groups.[3] Recently, since 2014 Yazidis were targeted by  ISIS’ genocidal campaign, which aimed at eradicating the Yazidi communities in Iraq. Specifically, a system of sexual slavery was established, and women’s bodies were traded and raped as a means to eradicate the birth rate of Yazidi children.[4]

We had the pleasure to meet Holya Khalaf, a 17-years old artist and Yazidi refugee living in the Netherlands.[5] She is a precious example of young women activism against the violence and injustices suffered by a discriminated ethnic minority, and at the same time an important source for reconstructing the history of the cruel assaults against the Yazidis trough art. Her mission is to raise awareness on the conditions and particularly on the struggles of Yazidi communities which experienced genocide and suffered the terrible atrocities of ISIS between 2014 and 2017, as a means to fight the injustice of impunity and to make the voice of oppressed Yazidi women heard. Specifically, through her paintings, Holya managed to tell her story of discrimination and the overall violence suffered by Yazidi people living in Iraq. For example, in order to represent the strength of Yazidi communities, she portrayed Shimidero, a Yazidi woman whose family was kidnapped, enslaved and forcedly made disappear by ISIS fighters.

In 2019, Holya showed her paintings in an exhibition organized in The Netherlands, and one of her paintings received a global special mention during a contest centered upon the topic of the Covid-19 pandemic.[6]
Today, Holya answered some of our questions and told us her experience with art, identity and Yazidi discrimination.

How do you express your Yazidi identity?
An expression of my Yazidi identity is the Kurmanji language, customs, traditions, rituals, religious symbols, the history of the Yazidi civilization, and one of the most famous and recognizable symbols of the bird peacock in temples or religious places.

How is your experience with Yazidi discrimination? Do you remember any episode of marginalization that you experienced directly or indirectly?

My experience with Yazidis discrimination is that the Yazidi religion and the Yazidi community are divided into three classes: the Sheikh, the Bir, and the Murid.  The Yazidis fast for forty days a year, starting in January. As for the marginalization, I was subjected to insults and beatings while I was in school by students because I am Yazidi and my culture differs from theirs.

To what extent do you believe that the marginalization of the socio-cultural background of Yazidis and their systematic discrimination contributed to the violence committed by the Islamic State since 2014?

To a large extent, the Yazidi people to this day suffer from lack of services, safety and protection. There are still conflicts between political parties in Shengal. As for genocide, an armed group calling itself the “Islamic State” committed war crimes and crimes against humanity between two years -2014 and 2017 – against the Yazidi community in Iraq, kidnapped Yazidi children and women, enslaved them, tortured them, forced them to fight, raped them, and exposed them to horrific violations. While thousands of children were killed or kidnapped, hundreds of them survived and returned to their families in Iraq.
However, their return to their homes did not mark the end of his suffering, knowing that all children enjoy, under international law, the rights to health, education, legal identity, and family unity without discrimination. Similarly, as far as women are concerned, Yazidi women who were kidnapped by the “Islamic State” and who gave birth to children as a result of sexual violence face difficult challenges.

Many of them were forced to separate from their children due to religious and social pressure. In addition, they live in a state of severe psychological distress. During the abovementioned attacks, nearly 10 thousand people, most of them men and children, who were over the age of 12, were killed.  More than 70 mass graves have also been discovered in the area.  Around 7,000 Yazidi women and children were kidnapped, sold, and raped.  Hundreds of thousands of Yazidis have managed to flee, and some of them returned to their homes from time to time.  Many of the survivors suffer from the effects of trauma, especially women and children. They managed to escape from ISIS slavery and today they are the most important witnesses to this genocide.

Do you believe that the recently-adopted law to protect Yazidi women who suffered from IS violence could represent a step toward the improvement of their conditions?

Yes, of course, in all moral and material respects. In addition, it will help them to complete their path in life, in terms of work, studies, health or living in safer places.

According to you, how relevant is activism and network-building among displaced members of Yazidi communities around the world in the maintenance of Yazidi identity?

To a large extent, since ancient times, the Yazidi nationalism has been active in preserving their identity in terms of language, the practice of their religious rituals, ancient traditions, cohesion, archaeological and historical places. Network-building is fundamental to preserve our identity and at the same time to enhance peaceful coexistence with other peoples.

Could you explain the meaning of “Yazda”? How do you conceive it?

Recent research according to clerics indicates that the name Yazda or Yazidis is taken from the term Sultan “Izi”, which means angel, deity, or worshiper of God.

[1] R. Jalabi, Who are the Yazidis and why is Isis hunting them?, The Guardian, 11 August 2014.
[2] Zoonan, D. and Wirya, K. 2017. “The Yazidis Perceptions of Reconciliation and Conflict,” Middle East Research Institute. Available from https://www.usip.org/sites/default/files/Yazidis-Perceptions-of-Reconciliation-and-Conflict-Report.pdf.
[3] V. CHABERT, Yazidi (Female) Survivors Bill: The Iraqui Law In Favour Of Yazides Victims Of Isis Violence, In: Opinio Juris, Law and Politics Review, May 2021.
[4] Ibid. See also: The Associated Press. “Building a Genocide Case for IS Crimes Against Yazidis” The New York Times. Available from:https://www.nytimes.com/aponline/2020/05/21/world/middleeast/ap-ml-is-yazidi-slaves-justice- abridged.html?auth=login-email&login=email.
[5] Holya’s paintings are available on her personal page at the link https://www.facebook.com/holyakhalafart.
[6] It is possible to see the painting at the linkhttps://www.artsteps.com/view/5f59e3ab58d20f2627a01b9a?fbclid=IwAR0XbHO5rFV-UNgn7q93P66_0fqrhilxp8XHZHCgt8kOGuc83JxTH1cah5E .