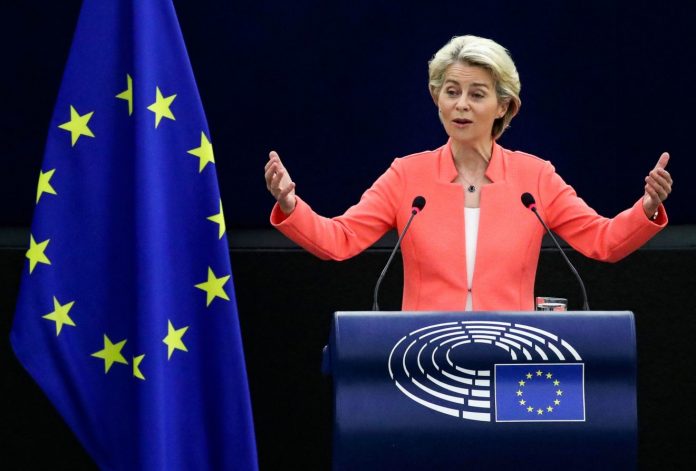 Ursula von der Leyen gave her State of the Union address to the European Parliament. She focused on vaccines, economic recovery, climate change and defence.

The Commission President’s State of the Union address to the European Parliament in Strasbourg has become a key annual event in understanding the vision for the future of the Union. On 15 September 2021, Ursula von der Leyen gave her second State of the Union address: a speech of just over fifty minutes in which she outlined the achievements of the past year and an overview of what she wants to do next. Last year the scene was dominated by the outbreak of the Coronavirus pandemic, while this year more attention was paid to the disaster of the military and political intervention in Afghanistan.

In terms of health and tackling the pandemic, the situation has improved over the last year: infections are under control. The EU has managed to vaccinate more than 70% of its adult population; it has prevented member states from taking conflicting measures. According to von der Leyen, “a pandemic is a marathon, not a sprint”[1]. She stressed the importance of a unified European strategy on vaccines, from joint purchasing to distribution of doses and the introduction of the EU digital certificate. To date, “we are the only ones to have shared more than half of our vaccines with the rest of the world, with over 700 million doses”. The EU aims to raise up to €50 billion by 2027 to ensure that no local outbreak can turn into a global pandemic. At the same time, the President announced her intention to establish a European Health Union (where the EU’s competences are only complementary to those of the Member States), launching the project for a new European Health Authority (Hera) to make the EU more resilient and capable of responding to future health emergencies. Much remains to be done in the area of prevention and distribution of vaccines in the poorest countries, given that less than 1% of doses are administered in low-income countries.

The Commission and its President can look back with satisfaction on how the EU has tackled the dramatic economic crisis triggered by Covid[2]. Von der Leyen quoted the maxi-recovery plan consisting of instruments such as NextGeneration EU (NGEU) and SURE (Support to mitigate Unemployment Risks in an Emergency), which aims at a double transition, green and digital. She also emphasised that the interventions financed by the European funds must be accompanied by the reforms that each Member State has undertaken to adopt. The Commission’s strategic choice has been rewarded with a return to pre-pandemic growth levels, aware that the new growth model will be inspired by the European Green Deal. The President invoked the exigency to guarantee a fairer system of corporate taxation that ensures a high-level playing field, also mentioning the implementation of the historic agreement on the global minimum tax. On economic governance and the reform of the rules on budgetary discipline – a highly divisive issue within the Union – the President wisely chose a cautious approach, simply pointing out that the Commission will make suggestions to restart the debate.

During her speech, she strongly defended the achievements of the European internal market, the engine of progress and prosperity in Europe over the last 30 years. Ursula von der Leyen insisted on the digital transition and the concept of strategic autonomy of the Union. She gave an example of a loophole in European technological sovereignty: the global shortage of semiconductors was slowing down entire European industries, which were now dependent on Asian producers. The Commission will be presenting a European semiconductor law intending to create a European chip ecosystem. This is an ambitious challenge, the scope of which is demonstrated by the reference to the success of the European satellite network Galileo as a model for inspiration.

Another thread in President von der Leyen’s speech concerned the quality of life of European citizens. She was very explicit about strengthening the European pillar of social rights, respecting people’s rights and life choices, and combating violence against women. She then highlighted the theme of European values and principles, the defence of the rule of law (and the role of the Court of Justice), the autonomy of the judiciary and the freedom and independence of the media. Without naming the two main defendants (Hungary and Poland), she made it clear that the Commission does not intend to make concessions on these issues of principle, which are enshrined in the Treaties[3] and form the basis of our legal system.

On climate change, she referred to the extreme events that took place this summer in several European countries. She stated there was an urgent requirement to move on from declarations of principle to concrete projects and binding provisions that would have to lead to precise fulfilment in order to achieve the very ambitious objectives that the EU had set itself with the Green Deal. In this sense, she made a clear appeal to the Member States to adopt the Commission’s package of legislative drafts without many changes. But von der Leyen also reported that the EU will not be able to fight global warming on its own. Other major CO2 producers, such as China, will have to follow Europe’s lead. The EU intends to take a cooperative approach in the run-up to the forthcoming COP26 in Glasgow (the 26th UN climate change conference).

One of the most eagerly awaited chapters was that of security and defence. The Afghan crisis has exposed all the weaknesses of NATO and the Union. She said: “We are working with NATO Secretary-General Jens Stoltenberg on a new joint declaration that will be presented before the end of the year. We must invest in our partnership”. However, the European strategy must be based on a Europe that can act autonomously where necessary. Von der Leyen notes that the time has come for a ‘European Defence Union’ and envisages the creation of EU intervention forces or battle groups. One unavoidable step is the sharing of data (intelligence and otherwise): if member states active in the same region do not share information at the European level, we are doomed to fail[4]. She advocated the necessity for Europeans to increase interoperability through common European platforms, and above all to make progress in the field of cyber security with a new European law on cyber resilience. Von der Leyen claimed “We need to lay the foundations for collective decision-making, with what I would call situational awareness” in order to be “better prepared, fully informed and able to decide”. A common threat assessment at the heart of Europe’s future strategic compass seems essential. In addition, we ought to decide how to exploit all the possibilities already provided by the Treaties. To this end, a European defence summit will be convened by von der Leyen and Macron during the French Council Presidency.

Another remarkable initiative is the proposal for a European programme (ALMA) for exchanges of temporary work experience in other Member States for young people who are not in education or employment, along the lines of the Erasmus programme. The focus on the younger generation – among the biggest beneficiaries of transformative projects such as NGEU and the Green Deal – returned several times in her speech. The Commission proposes that 2022 should be the European Year of Youth. Not surprisingly, President von der Leyen invited Paralympic champion Bebe Vio, praising her story as a rebirth against all odds. “She is the image of her generation: a leader who has managed to achieve all this while remaining true to her conviction that if it seems impossible, then it can be done”, von der Leyen specified. This is the spirit that drove the founding fathers, and it is the spirit of the next generation of Europe.

In her speech in Strasbourg, von der Leyen wanted to give a positive assessment of how the EU had reacted to the pandemic with effective initiatives, from vaccines to the economy, and to convey a message of confidence about the upcoming deadlines. And she did so in the knowledge that without the European Parliament and, above all, without governments, it will be difficult to make much progress. At this juncture, with general elections in Germany, presidential elections in France and the election of the next President of the Republic in Italy, the political picture in Europe is extremely uncertain.