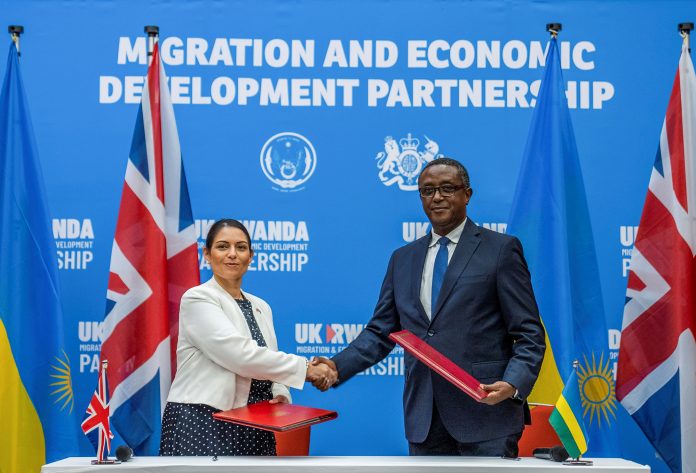 On 13 April 2022, the government of United Kingdom and the government of Rwanda entered into a Memorandum of Agreement for the Provision of an Asylum Partnership Arrangement (MOU) . This deal – as part of a package of measures introduced by the English government to reform the asylum system, known as the New Plan Immigration policy agenda – represents the crucial aspect of the Migration and Economic Development Partnership sealed by the two countries  and will last 5 years.

On 13 April 2022, the government of United Kingdom and the government of Rwanda entered into a Memorandum of Agreement for the Provision of an Asylum Partnership Arrangement (MOU)[1]. This deal – as part of a package of measures introduced by the English government to reform the asylum system, known as the New Plan Immigration policy agenda[2] – represents the crucial aspect of the Migration and Economic Development Partnership sealed by the two countries[3] and will last 5 years[4].
The preamble of the Asylum Partnership Arrangement states that the co-operation between UK and Rwanda strives “to contribute to the prevention and combating the illegally facilitated and unlawfully cross border migration”.
Nevertheless, the stated positive intention – also expressed by the suggestive slogan repairing the broken asylum system is a moral imperative[5] – have rapidly raised concerns and criticism by different sides on national and international levels.
It is essential to briefly illustrate the key features of the MOU before mentioning any controversial aspect of the mentioned agreement in the final paragraph.

The mechanism for the relocation

The stated objective of the asylum partnership is to create a mechanism for the relocation of the asylum seekers to Rwanda which will process their claims[6].  Thus, the arrangement permits UK to relocate some people to Rwanda which will decide whether asylum seekers have the right to stay or return them to their country according to the domestic law, to the 1951 Refugee Convention and to the International Human Rights Law. Under no circumstances the individuals are eligible to return to UK, unless this is requested by the United Kingdom[7].
In return, Rwanda will receive 120 million pounds funding from the UK, plus the processing and integration costs for each relocated person.
The mechanism for the relocation sets out different steps. The United Kingdom will be responsible for the initial screening of the asylum seekers as soon as their arrivals come to attention of the UK. Before relocating people, UK will request the approval of the transfer of the individuals to Rwanda considering their capacity to receive them[8].
Once the individual transfer request has been approved, UK will provide Rwanda with all the relevant biographical details of the individual (name, sex, date of birth, nationality and any copy of their travel document if they have any) and will be responsible for the safe transportation of the relocated people[9].
On its part, Rwanda will receive the relocated individuals on its territory providing them with “accommodation that is adequate to ensure the health, security and wellbeing (…) and support that is adequate to ensure the health, security and wellbeing”[10].

Rwanda will play a central role while processing the asylum claims of each relocated individual.
Accordingly, Rwanda will decide whether to grant or not the refugee status to each relocated person in accordance with the domestic law, the 1951 Refugee Convention, the international human rights standards including the protection from inhuman and degrading treatment and refoulement[11].
Besides, Rwanda will ensure that the procedural safeguards for asylum applicants are followed, such as the access to an interpreter, the legal assistance at every stage of the asylum claim and an appeal against any decision made on their application[12].
The Memorandum of Understanding contemplates four potential scenarios in the decision-making process and, at the same time, states a “treatment post asylum decision”[13].
The first scenario refers to the individuals recognised as refugees by Rwanda, for whom this country will grant the “Relocated Individual refugee status” and will be responsible to provide support, accommodation, integration into society and freedom of movement in accordance with the 1951 Refugee Convention[14].
The second scenario refers to those who are not recognised as refugee: in this case Rwanda will consider if for those relocated individuals there is “a real risk of their being subject to inhuman, degrading treatment or torture or a real risk to their life”[15]. Thus, if there is a humanitarian protection need, Rwanda will accord them the same status of those recognised as refugees and the permission to remain in its territory.
The third scenario, instead, considers the individuals who are neither recognised as refugees nor to have a humanitarian protection need. In this instance, they can apply for a permission to remain in accordance with the domestic immigration law. They will receive accommodation and support until their status is regularised in Rwanda[16].
Lastly, the fourth scenario contemplates the relocated individuals who do not fall in any of the mentioned cases. In this situation, Rwanda will remove the person to a country in which they originally reside and they have the right to stay. Nonetheless, “if there is no prospect of such removal occurring for any reason Rwanda will regularise that person’s immigration status in Rwanda”[17].

Legal challenges: the analysis of the United Nations High Commissioner for Refugees and the intervention of the European Court of Human Rights

The Asylum Partnership Arrangement between UK and Rwanda, as mentioned in the first paragraph, has raised several concerns and criticism by many parties[18] until the intervention of the European Court of Human Rights on 14 June 2022[19], the same day that the flight with on board the first group of relocated people was due to take off from UK to Rwanda[20].
Without claiming to be exhaustive, this paragraph will consider some of the challenges raised from the MOU, especially in relation to the UK’s obligations under the 1951 Refugee Convention as illustrated, among the others, in the analysis of the United Nations High Commissioner for Refugees (UNHCR)[21].
The fact that the MOU applies to the individuals who irregularly entry in the territory of the UK making dangerous journeys across the English Channel raises legal issues in relation the Article 31.1 of the Refugee Convention which states that “the Contracting States shall not impose penalties, on account of their illegal entry or presence, on refugees who, coming directly from a territory where their life or freedom was threatened in the sense of article 1, enter or are present in their territory without authorization, provided they present themselves without delay to the authorities and show good cause for their illegal entry or presence”[22].
Despite the fact that this provision applies to the individuals who have presented immediately themselves to the authorities, “depriving asylum-seekers of access to a fair and efficient asylum determination and treatment in line with international standards is not permissible, as it may expose them to the risk of refoulement and other rights violations”[23].
An additional legal issue relates to the Rwanda’s asylum system which compared to the UK’s system appears less developed. According to the UNHCR’s analysis, there many concerns which could negatively affect the asylum seekers, such as: discriminatory access to the asylum procedure, lack of representation by a lawyer, lack of motivation for negative decisions, insufficient access to interpreters, etc.
Furthermore, “the arrangement also acts to attempt to shift responsibility for identifying and meeting international protection needs from the UK to Rwanda, against the principle of burden sharing. Therefore, UNHCR considers the arrangement as an example of externalization of international protection and is, as such, unlawful”[24].
These concerns – and many others which this paragraph does not include for the sake of brevity – have been raised to the UK’s government which deliberately has decided to go ahead and plan the first flight to Rwanda on 14 June 2022.
On the same date, a very unexpected turns of events happened when the European Court of Human Rights (ECHR) decided to grant an urgent interim measure under rule 39 of the Rules of the Court[25] in the case of an asylum seeker who was facing an imminent removal as he was on board of that flight.
The ECHR stated that “the applicant should not be removed until the expiry of a period of three weeks following the delivery of the final domestic decision in the ongoing judicial review proceedings”.
In its decision, the ECHR mentioned the concerns raised by the United Nations High Commissioner for Refugees, especially in relation to the fact that “asylum-seekers transferred from the United Kingdom to Rwanda will not have access to fair and efficient procedures for the determination of refugee status”.
In the Court’s view the “risk of treatment contrary to the applicant’s Convention rights” and “the absence of any legally enforceable mechanism for the applicant’s return to the United Kingdom in the event of a successful merits challenge before the domestic courts” represent a “serious triable issue”.
Furthermore, on the same grounds the ECHR granted an additional urgent interim measure to two asylum seekers on 15 June 2022[26].

The issues raised by the Asylum Partnership Arrangement between UK and Rwanda represent serious concerns which should not be ignored by UK’s government.
Nevertheless, while the UK-Rwanda deal is on pause following to the intervention of the European Court of Human Rights, the English government seems putting forward “sweeping plans” in order to override the decisions of the Strasbourg Court[27].
The strategy of the government is to replace the Human Rights Act[28] with a new bill which makes the ECHR interim measures non-binding for the English courts.
The English government has already opened the consultation for the new proposal which – among the others – (illogically) states that “the Bill of Rights will continue to respect the UK’s international obligations as a party to the Convention. The UK will also continue to support further reforms to the European Court of Human Rights in Strasbourg as well as the wider system of the Convention”[29].
Nevertheless, assuming a system that respects its obligations under the European Convention of Human Rights without enforcing the decision of the ECHR is difficult and, furthermore, what about the obligations under the 1951 Refugee Convention?Unfortunately, this is not the place to analyse the new proposal which, instead, could be a topic of a further contribute.