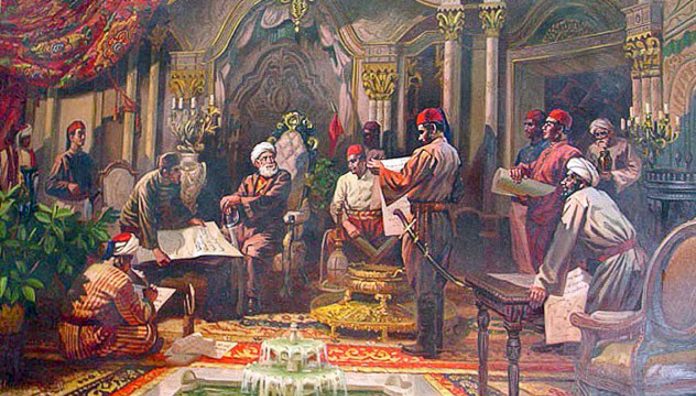 Among the Arabic legal systems and their development, the Egyptian codes are worth mentioning being the first non-Islamic nor Sharia-compliant laws. Their origins date back to the French and British colonial period, hence their development is rather controversial.

On the 1st of July 1798 the Napoleonic army lands near Alexandria in Egypt[1], when the conflict between France and Great Britain is at its peak: France is still suffering from the Canadian and Indian defeats of 1763 and, at the moment, its primary purpose is to regain power by conquering Egypt. Each attempt, however, is a failure: firstly, on the 1st August 1798, France loses the battle against the British fleet in Abu Qir Bay; then, again, is defeated by a joint Anglo-Ottoman force, in March 1801[2]. Therefore, in 1802 France is forced to sign two different peace treaties with both Great Britain and the Ottoman Empire: the two European powers have to leave the Country. The control of the Country is now in the hands of the Sublime Porte, with a new ruler: Mehmet Ali, an Ottoman-Albanian officer who becomes governor in 1805.

Muhammad (Mehmet) Ali marked a turning point for Egyptian modernization, starting with the enactment of agricultural and administrative reforms[3]. However, he also had to follow the reforms of Istanbul, including the establishment of the Supreme Council of Judicial Ordinances in 1838 by Mahmud II. The purpose of this new body was to remove the judiciary from the rule of the shari‘a to that of the state. It was just the beginning of the modernization of the Empire: 1876 saw the creation of the Mixed Courts, nothing more than a tool in the hands of Europeans to assert their supremacy in the Country.

As a reaction to the mixed courts, Egypt established its own system of secular courts: the National Courts, in charge of the local population. At the time, the Country did not have its own codes or, at least, its own reforms were being developed. Thus, the National Courts, which became operational in 1883, started to follow the jurisdiction of France and its Napoleonic Code[4]. Lord Cromer – Consul General of Egypt from 1883 to 1907 – in his book “Modern Egypt” explains why, despite the British protectorate in the Country, the legal system followed the French model.  «It is true that, prior to 1883, no system of justice existed in Egypt. It is not, however, on that account to be supposed that the English were free to introduce into the Country any system which they preferred. Such was far from being the case. French law and procedure had already taken root in Egypt. The codes administered by the Mixed Tribunals were French. All the young Egyptians who had received any legal training had been educated in France. It was, therefore, inevitable that the new Tribunals should be based on a French rather than on an English model.»[5]

The Penal Code takes its shape

In addition to these reforms of modernization and secularization of the Country, by Mehmet Ali, the French Codes started to be translated into Arabic. Indeed, in 1828 the Governor of Egypt sent a group of compatriots to Paris to study law and return to the Country in order to work on the mentioned translations: the first works in Arabic were the Civil and Commercial Codes, followed by that of Criminal and Civil Procedure[6]. We are now at a point in history where Western influence is increasing more and more in the Country, especially in its legal system.

In the same year of its independence from Great Britain, in 1922, Egypt amended its codes; the old Penal Code of 1883 was replaced by a new one issued in 1937 and again in 1949, eliminating the Mixed Courts and covering the entire population in the Country, which is still in force[7].

What interests us, for this study, is: Book Third, Title II, Section IV of the Napoleonic Code: Attacks on Morality (Attentats aux Mœurs) [8] which corresponds to Book Three, Part Four of the Egyptian Penal Code: Threats to indecency and corruption of morality.

The enactment of “debauchery”

A translation of the Napoleonic Code therefore brings to the Country new ideas for its own national Penal Code, with all its pros and cons. It is thus clear that Egypt did not issue a code that would meet its own needs, but rather preferred to “copy” an existing one, conforming to French moral standards.

The concept of debauchery, in fact, is specific to describe someone who has relations with a person of the same sex was far from the Egyptian culture of the time. Indeed, the Egyptian writer Rifāʿa al-Tahtāwī, during his visit to Paris between 1826 and 1831 writes as follows:

It is therefore in this scenario that the Penal Code of 1837 emerges, whose articles 270, 271 and 272, in the context of the articles that criminalize acts against morality, are replaced by the subsequent law n.58 of 1951, which later became the current law 10/1961.
This law, in article 9c reads:

However, the difference between the two countries emerges today: France which came to legalize same-sex marriages in 2013 and Egypt which continues to make arrests and make use of unorthodox “tests” to verify the actual homosexuality of a person. Therefore, one wonders what is the responsibility of Europe, and of France specifically, for the existence of such laws and for the legal development of modern Egypt.

[1] A. J. Goldschmidt, A brief history of Egypt, Facts On File, Inc., New York, 2008, p. 62
[2] Ivi, p. 65
[3] W. B. Hallaq, An Introduction to Islamic Law,Cambridge Univeristy Press, New York, 2009. p. 103
[4] A. J. Goldschmidt, op. cit., p. 92
[5] E.B. Cromer, Modern Egypt, Macmillan, New York, 1908, p.516
[6] Ivi, p. 104
[7] S. Reza, “Egypt,” in K. J. Heller, & M. D. Dubber (edited by), The Handbook of Comparative Criminal Law, Stanford University Press, Stanford, 2011, pp. 179-208, p. 181
[8] French original text is available at https://web.archive.org/web/20070213204406/http://ledroitcriminel.free.fr:80/la_legislation_criminelle/anciens_textes/code_penal_1810/code_penal_1810_3.htm
English translation is available athttps://www.napoleon-series.org/research/government/france/penalcode/c_penalcode3b.html
[9] R. al-Tahtāwī, Takhlīṣ al-ibrīz ilā talkhīs Bārīz, 1834, p. 78 Translation from K. el-Rouayheb, Before Homosexuality in the Arab-Islamic World, 1500-1800, 2005, p. 2: Amongst the laudable traits of their character, similar really to those of the Bedouin [‘arab], is their not being inclined toward loving male youths and eulogizing them in poetry, for this is something unmentionable for them and contrary to their nature and morals. One of the positive aspects of their language and poetry is that it does not permit the saying of love poetry of someone of the same sex. Thus, in the French language a man cannot say: I loved a youth (ghulām), for that would be an unacceptable and awkward wording. Therefore, if one of them translates one of our books he avoids this by saying in the translation: I loved a young female (ghulāmah) or a person (dhātan).
[10] Full text available at:https://eipr.org/sites/default/files/reports/pdf/law_no.10-1961_.pdf Unofficial English translation available from Human Rights Watch, In a time of torture: The Assault on Justice in Egypt’s Crackdown on Homosexual Conduct, Appendix A: Laws Affecting Male Homosexual Conduct in Egypt, 2004, pp. 129-131: Punishment by imprisonment for a period not less than three months and not exceeding three years and a fine not less than 25 LE and not exceeding 300 LE in the Egyptian administration and not less than 250 Lira and not exceeding 3000 Lira in the Syrian administration or one of these two punishments applies in the following cases: (c) Whoever habitually engages in debauchery or prostitution.
[11] M. Pantalone, Il peso della diversità, in Opinio Juris, Settembre 2021, pp. 44-47
[12]https://web.archive.org/web/20070213204406/http://ledroitcriminel.free.fr:80/la_legislation_criminelle/anciens_textes/code_penal_1810/code_penal_1810_3.htm Translation available at: https://www.napoleon-series.org/research/government/france/penalcode/c_penalcode3b.html Whoever shall have attacked morals, by exciting, favoring, or facilitating, habitually, debauchery or corruption in the youth of both sexes, under the age of twenty-one years, shall be punished with an imprisonment of from six months to two years, and a fine of from 50 to 500 francs. If the prostitution or corruption has been excited, favored, and facilitated by their fathers, mothers, guardians, or other persons entrusted with their superintendence, the penalty shall be an imprisonment of from two to five years, and a fine of from 300 to 1,000 francs.