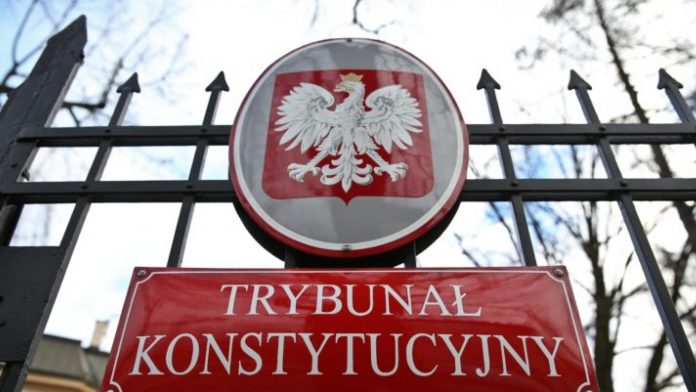 Poland’s highest court ruled that parts of the EU treaties are incompatible with the constitution, challenging a pillar of European integration.

For the European Commission, the ruling raises a number of concerns about the primacy of EU law. Poland’s Law and Justice (PiS) party has been embroiled in a battle of values with Brussels for years. Disputes have focused on the independence of the courts, media freedoms, LGBT rights and other issues.

Critics of the ruling claim that the PiS government is endangering Poland’s future in the union and the stability of the EU itself. PiS, of course, denies such conclusions and says it has no plans for a “Polexit”. The Polish constitutional court took over the case after Prime Minister Mateusz Morawiecki requested it. It wanted to investigate whether EU institutions can prevent Poland from reorganising its judicial system.

“This is a legal revolution,” said René Repasi, professor of international and European law at Erasmus University Rotterdam. “This is the biggest step towards a legal exit from the EU ever taken by a national court.”

Brussels accuses PiS of undermining judicial independence through the sweeping reforms they would like to implement. The party, of course, denies this and says that the changes are intended to make the courts more efficient and free them from the influence of the communist era.

It affirms the right of the Constitutional Court not only to review the constitutionality of EU sources, but also the rulings of the Court of Justice[1]. The European Commission said it would analyse the ruling before deciding its next steps, without going into details. “Our Treaties are very clear. All European Court of Justice judgments are binding on all member state authorities, including national courts. Union law has precedence over national law, including constitutional provisions.”

“The Commission will not hesitate to use its powers under the Treaties to safeguard the uniform application and integrity of EU law.” “Our top priority is to ensure that the rights of Polish citizens are protected and that Polish citizens enjoy the benefits guaranteed by EU membership.” said von der Leyen in a brief statement [2].

“In addition, EU citizens and companies doing business in Poland need the legal certainty of EU rules. Including the rulings of the European Court of Justice.” The supremacy of EU law is one of the fundamental principles of the European Union. Established in 1964 as a result of the earlier case Costa v ENEL. The principle states that, in all cases where the EU has competence, EU sources have priority over national legislation.

What does the judgment say?

According to the ruling, the constitution is the supreme law in Poland, and any international agreement or treaty, being of a lower rank, must comply with this supreme law. EU treaties are considered to be international agreements signed by nation-states. The Polish court targeted two specific articles of the Treaty on European Union (TEU). Article 1, which establishes the existence of the European Union and the conferral of powers by the member states. Article 19, which determines the powers of the Court of Justice of the EU (ECJ), whose mission is to ensure compliance with EU law. Two of the 14 judges dissented from the ruling, which followed months of court proceedings. The Polish government insists that the judiciary and justice system are the exclusive competence of EU member states. Based on this, the government has ignored a number of EU court rulings.
The EU sees the Constitutional Tribunal itself as illegitimate because of the political influence of Poland’s ruling party on the appointment of its judges. Of Poland’s 14 constitutional judges, 10 have been appointed by the ruling party Law and Justice (PIS) in recent years. Many are, therefore, loyal to the government, including the president of the court, Judge Julia Przylebska, who led the jury in the current case. It is not clear what kind of practical ramifications the Polish ruling will have. The ruling will only take effect once published in the Official Journal of Poland[3], a move left to the government’s discretion.

The consequences of the judgment within the Union

The court had started to deal with the case in July but adjourned it four times before the recent session. Some critics say the delays may have been aimed at putting pressure on Brussels to accept Warsaw’s National Recovery Plan. Funding for the aid programme is linked to compliance with European standards on the rule of law and democracy. The European Commission had already approved most of the national plans but refused approval for Poland because of these standards. Daniel Freund, a German Green MEP who sits on the European Parliament’s budget committee, commented on the matter. For him, Poland was “saying goodbye to the European legal order”. The EU “cannot transfer billions to a member state without being able to legally guarantee that the money reaches those for whom it is intended”.
The EU has never seen a member state’s judicial system so openly challenge the foundations of the Union, leaving Brussels with few options to react. The opening of a new infringement procedure could prove futile as the Court of Justice has the final say on punitive measures. And let us recall that the Polish judicial system does not fully recognise the jurisdiction of the Court of Justice.
An alternative to the infringement procedure could be the Article 7 procedure for the defence of the rule of law. The procedure is already underway but has stalled in the Council. According to Franklin Dehousse, professor of law at Liège and former judge at the Court of Justice, the problem goes back several years. “This precarious situation can be traced back to 2004 when the Treaties were not sufficiently adapted to enlargement. The rule of unanimity of the countries was maintained, particularly in the management of the Article 7 procedure concerning violations of the rule of law”.

The primacy of EU law over national law and Article 4 of the Lisbon Treaty
The constitutional law of the Member States has settled on a pattern of the primacy of European law. This is unless European law affects fundamental principles of the nation-state, the so-called theory of counter-limits. Article 4 TEU[4] states that the EU must respect the national identity inherent in the states’ fundamental political and constitutional structure. The question is whether the Polish Constitutional Court is going beyond the theory of counter-limits.
This theory has been confirmed by the arrival of Article 4 of the Lisbon Treaty. This article sets out the principle of the EU’s duty to respect the principles of the state structure. It should also be noted that other provisions that could be referred to include Article 67(1) of the Treaty on the Functioning of the European Union. This article reiterates the “respect for fundamental rights and for the Member States’ different legal systems and traditions” to which the EU is bound.
Finally, the situation is rounded off by case law. The Court of Justice has never yet been called upon to plead infringement of the aforementioned Article 4 of the Treaty; whether this will happen in the near future is, of course, not known. For these reasons, there is more than one element to believe that Article 4 remains a “style” clause resulting from a reasonable compromise.

The systematic perspective of the Polish legal system

The ruling of 7 October 2021, according to a part of Polish jurists, only confirmed the already existing hierarchy of sources of law in Poland. Already in 2005,[5]the Polish Constitutional Court presided over by Judge Marek Safjan, established the following principle. “The Constitution is the supreme law of the Republic of Poland with respect to all international agreements binding it. Including agreements on the allocation of competences in certain cases. The Constitution enjoys priority of validity and application on the territory of Poland.” (Judgment of 11 May 2005, Case K 18/04). Subsequent rulings of the Constitutional Court have confirmed this principle.

According to the supporters of the recent sentence, the supremacy of EU law would establish a lower standard of judicial protection for Polish citizens. This is because, under the Constitution, judges appointed by the President of the Republic are immovable and are subject only to the Constitution and the law. Allowing an appeal against the judgments of the judges of the Constitutional Court effectively deprives them of judicial power. This, in turn, deprives citizens of legal certainty and confidence in the judiciary. Pursuant to Article 9 of the Constitution of the Republic of Poland, Poland respects the international law that binds it. This means that all obligations arising from European Union law, both primary and secondary, remain in force and will be complied with by Poland. The Court, therefore, has not challenged the provisions of the Treaty on European Union in their entirety but, in practice, risks severely restricting them.

Some of the acts of the EU institutions, in particular the Court of Justice of the EU, have been considered ultra vires, exceeding the powers conferred by the Treaties. Such judgments[6] have been made in Poland and France, Denmark, Italy, the Czech Republic, Spain, and Romania. The most established line of jurisprudence in this area has been pursued since the 1970s by the German Federal Constitutional Court.
Obviously, the challenge posed by the Polish court is unprecedented, but it should be investigated whether there are legal or political reasons behind this challenge. In fact, hierarchical problems within the Union are always reminiscent of the failure or non-completion of a more ‘federal’ project. From the failure of the European Constitution to Brexit, European institutions struggle to contain the prevarication of national policies and interests. In the absence of greater involvement and commitment by member states, the efforts of the Court of Justice and the Commission remain limited. The day will probably come when the economic leverage of European aid will no longer be sufficient to hold EU law together.