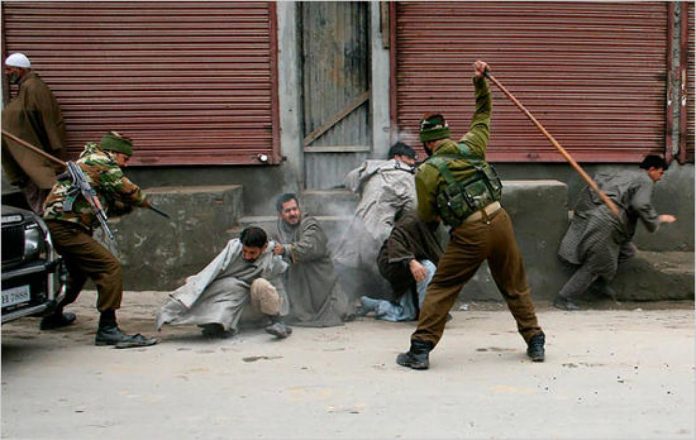 Contested by three nuclear powers, China, Pakistan and India, the Kashmir region has suffered from atrocious violations since 1947 while its population is stifled.

Suffering from the consequences of British decolonization is not only the Palestinian territory’s problem, which at the moment is in the spotlight more than ever, but also the problem of a territory that, today, three powers claim: Kashmir.

After 1947 India and Pakistan gained their independence by creating two states with Hindu and Muslim majority respectively. This did not happen to Kashmir, the bearer of a different reality as it was ruled by a Hindu monarchy at the time, but with a Muslim majority population, which is why the state of Pakistan feels a particular sympathy for it.

The wavering ruler Hari Singh[1] provokes the fear of those who did not want to be annexed to India, a fear that quickly translates into a revolt: the Poonch[2] Rebellion, supported by militiamen from Pakistan.

The monarchy asks New Delhi for help to clean the mess; all this in exchange for annexation[3] to India.

Kashmir, on October 26, thus signs the instrument of annexation, which declares it definitively Indian. Nowadays, October 26, in the territory of Jammu and Kashmir, is still a public holiday. Even if, although de jure it is a public holiday, we cannot say that for everyone it is de facto.
The territory of Kashmir witnessed three Indo-Pakistani wars for its conquest in the years 1947[4], 1965[5] and 1999[6].

In 1972, after the third Indo-Pakistani war of 1971, India and Pakistan signed the Simla[7] agreement where they decided to resolve the Kashmir issue through a demarcation line in the Siachen Glacier area. However, it was an ephemeral solution as the conflicts did not end.

Terrorism as a consequence

In addition to local uprisings, citizens are starting to organize themselves into radical Islamic military groups which are supported by Pakistan. According to the SATP[8] (South Asia Terrorism Portal) in Jammu and Kashmir there are 12 outlawed extremist terrorist groups, 10 active groups and 19 inactive rebel organizations.

“To wipe out the armed insurrection and crush public dissent, India has increased its military deployment, making this small region the highest militarized zone in the world,” says The New Arab[10].

In the second half of 1989, the Jammu and Kashmir Liberation Front (JKLF) intensifies its action by carrying out murders and kidnappings, including that of the daughter of Interior Minister Mufti Mohammed Sayeed, Rubaiya Sayeed[11].

Taking a step back, we note that since the 1987 elections in Kashmir, unrest has dominated.

“I remember there was massive fraud in the 1987 elections. The defeated candidates were declared winners. It shook the confidence of ordinary people in the elections and the democratic process”[13] Khem Lata Wukhloo, the then leader of the Congress party, told the BBC. The crimes of which the Indian army is accused of ranges from rape to torture.

“The troops arrived, there were 150 men, we begged for help but they broke in and raped us” says Sara Begun, victim of the Kunan Poshpora accident (February 23, 1991) while Mohammed Amin Sheikh confirms “We saw our women in tatters , the people of the neighboring villages came to the rescue with vehicles […] we were not in a position to help even ourselves. We were tortured all night by the soldiers ”.

The incident occurred following an attack by the militiamen on the Indian army, which subsequently decides to do a treasure hunt in the surrounding villages, such as that of Kunan Poshpora[14], and find rebels among the population, without depriving themselves of the fun to raid.

In 1992 Asia Watch[15] and PHR sent an investigative team to document abuses, human rights violations and violations of the laws of war, then publishing two reports[16] describing the methods of torture used by the army and violations including killings and rape.

The use of pellet or pellet guns is common and usual for Indian security forces. In January 2018, then Prime Minister of Jammu and Kashmir Mehbooba Mufti told the state legislature that 6,221 people had been wounded by weapons.

Al-Jazeera reports that more than 6,000 people have lost their sight partially or completely in the past few years after being hit by the bullets.

The youngest victim is in Kapran, a village in Indian Kashmir. She was only 20 months old when Hiba Nisar[17] was hit by bullets fired at her home.

“We have a document that testifies that in 2021 we will receive the money, at the moment we are spending it out of our own pocket,”[18] says the mother.

Doctors at the SMHS hospital say she underwent surgery because she had suffered a corneal perforation, an abnormality in the cornea resulting from damage to the corneal surface, due to the granules and the doctor who treated her does not guarantee that the view is restored to 100%.

The new Government Medical Collage study reports that as many as 85% of people blinded by pellet guns also suffer from psychiatric problems and states that since 2016, 325 victims have been treated for psychiatric disorders.

After 18 months of network blackouts to stop the response to the re-enactment of the semi-autonomous state of Kashmir, India is restoring 4G internet services throughout the region. The reenactment also included entertainment platforms such as Amazon and Netflix as well as other social networks including Facebook and Whatsapp. The lockdown began on August 5, 2019, and Amnesty International urged the government to restore broadband internet services even in light of the COVID-19 pandemic.

According to Access Now[20], it was among the longest internet arrests ever seen in a democracy, or we should hardly call it such.

[1] “The last Maharaja of the state of Jammu and Kashmir” {cf. Wikipedia}
[2] {“Poonch (or Punch) is a city in India of 23,442 inhabitants, the capital of the district of Poonch, in the territory of Jammu and Kashmir.” See Wikipedia}
[3] https://centralexcisehyderabad4.gov.in/documents/history/1947_2.PDF
[4] 1st Indo-Pakistani War
[5] 2nd Indo-Pakistani War
[6] 4th Indo-Pakistani War
[7] https://www.mea.gov.in/bilateral-documents.htm?dtl/5541/Simla+Agreement
[8] https://www.satp.org/terrorist-groups/india-jammukashmir
[9] {cf. TRTWorld “India maintains a deployment of 500,000 heavily armed troops in the small Himalayan region, which has been divided between the South Asian nation and Pakistan since their split in 1947.”}
[10] https://english.alaraby.co.uk/analysis/year-death-destruction-and-censorship-kashmir
[11] {“She was abducted at 3:45 pm on December 8, 1989, about 500 meters from her home in Nowgam, on her way back from Lal Ded Memorial Women’s Hospital in a local minibus. Four people forced her out of the vehicle with a gun pointed at a waiting Maruti car and disappeared. ” See Wikipedia in Mudus operandi}
[12] https://youtu.be/ZX1Mhl3WXGM
[13] https://youtu.be/JwGXYw5vf3w
[14]http://news.bbc.co.uk/2/hi/south_asia/2223364.stm
[15] Human Rights Watch.
[16]https://s3.amazonaws.com/PHR_Reports/crackdown-in-kashmir-1993.pdf – https://s3.amazonaws.com/PHR_Reports/pattern-of-impunity-kashmir-1993_opt.pdf
[17] https://kashmirthunder.com/2019/05/20/pellet-victims-welfare-trust-along-with-20-months-old-pellet-victim-hibba_nisar-protest-at-press-enclave-demanding-an-end-to-the-use-of-pellet-guns-in-kashmir/
[18] https://www.thequint.com/videos/youngest-pellet-victim-mother-on-kashmir-conflict
[19] https://www.business-standard.com/article/current-affairs/pellet-guns-have-killed-24-blinded-139-in-kashmir-since-2010-report-119080200151_1.html
[20] https://www.accessnow.org/after-a-partial-restoration-of-internet-access-in-jammu-kashmir-access-now-urges-full-access/