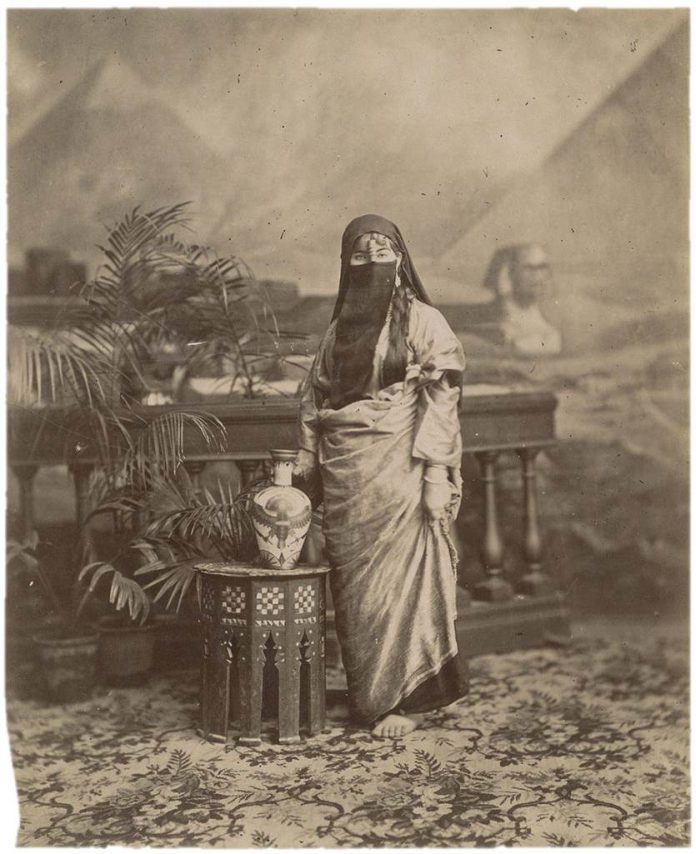 European colonialism in the past few centuries has completely twisted the concepts of personal and communitarian identity. In Egypt, for example, theater and its evolution perfectly reflect the dynamics between the colonizer and the colonized, from the request for independence until the reaching of a total customization of the theater and the concept of revolution.

Opening of the theaters in Egypt

The first theatrical performances in Egypt were staged during the French colonial occupation with the aim of cheering up the military and diverting the attention of the local population[1]. Even though the very first plays were purely amateur performances, they led to the opening of the first ‘theater hall’ on December 13th, 1800 in al-Azbakiyyah.
From a first phase in which only Europeans could stage plays, they reached a point where also Arabs were allowed to express themselves, though following the French custom. Nevertheless, the concept of freedom of expression was still far away: indeed, the works played must undergo the watchful eye of censorship and were obliged to spread the European ideals.

The term iqtibās refers to the adaptation of European works to the needs of an Arab public, a peculiarity that is part of a translation movement encouraged by local authorities. The pièce from the European heritage are countless: from Corneille to Racine, from Hugo to Shakespeare. However, these works did not consist of simple translations at a purely linguistic stage, they are not just tarjamah (translation), but real adaptations whose intent is to set the story in Arab contexts and places, for which the right term to use is ta’rīb (Arabization) or tamṣīr (“Egyptianization”). After the First World War and the subsequent Ottoman Empire’s loss of the control over Egypt, the need increases for local artists to implement their own works reflecting and respecting their specific needs. The most representative author is Farah Antūn who asserts himself as a social author and does not consider Europe as a symbol of modernity, but as an additional political oppressor. His works “Old and New Egypt” (1913) and “Sultan Saladin and the Kingdom of Jerusalem” (1914) reflect the thoughts of the average Egyptian of the time, being freed from the Turkish occupation and from the Western imperialism. All these works, although, do not slip through the cracks of the censorship, entirely managed by British colonists since 1920. Indeed, among the censored victims we find the author Ahmad Shawqī who was forced into exile in Spain due to his anti-British compositions.
The process of reasserting the Egyptian culture will be long: in the first half of the twentieth century, Arab playwrights were forced to stage their works with the physical presence of the colonizer in the country, which caused issues and slowdowns; the second half of the twentieth century, though, is characterized by a free Egyptian Republic, being allowed to express itself without major problems.

In the second half of the twentieth century, Egyptian (and Arab) history goes through few changes. In July 1962, thanks to the revolution of the Free Officers, King Farūq is dismissed and the British troops are forced to leave the country; in 1954 the new president of the Arab Republic ‘Abd el-Nasser is considered the leader of Arab nationalism. This cultural policy also affects the Arab theater, which is supported by a new ministry that will deal with the entire artistic sector. The plays are now focused on political matters combined with artistic flows, finally leading to the «committed theater»[2]. From now on, various authors try to stage the current reality of the country through their cultural heritage (al-turāth), the plays of this period, indeed, switch between classical works and contemporary works of social and political nature, in order to affirm an authentically Arab and popular theater. Based on this background al-ta’ṣīl starts to develop, as the pursuit of an authentic and original Arab theater.
We are now at a point where the Egyptian theatre reaches its post-colonial phase, where people have to face the dilemma between modernity and tradition. It is at this very moment that the colonizer-colonized borderline is re-established: the Arab people cannot stand anymore to stage works not in line with their culture, they want to assert themselves by highlighting their differences from Europe. Specifically important for this phase of the theatre is the conference held in Hammamet from 14 to 21 January 1965, which brought to the drafting of a document that affirms that the theatre “should contribute to the definition of a common cultural matrix to the whole Arab world”[3].
In this historical moment the same struggle Egypt is facing is also shared by other countries worldwide, bringing to the development of the Third World Theater Movement. It is a flow that brought to different conferences, the first one in Manila in ’67, the second in Shiraz, in Iran, in 1973, which both led to the resolution Tendencies and Prospects for Third World Theatre. The main idea was to create an authentically Asian, African, Latin American theater, to preserve cultural traditions and reflect national identities, avoiding the imitation of the Western theater, with the aim of renewing its assets and give light to a modern experimentation.
During this period theater’s main aim is its public, authors want to listen to their spectators in order to stage works that can be appreciated by everyone. The idea is to transmit a nationalist spirit through the theater, an idea of ​​pride towards their country. In this regard, one of the most appreciated Arab playwrights of the 20th century, Sa’d Allāh Wannūs, speaks about a “politically committed experimental theater”: the theater is indeed a ‘social event’ in which the public is the central element with the purpose of developing a collective consciousness. Through the use of ‘politicized theater’ he wants to forge conscious viewers aware of the ongoing reality, stimulating them in order to become leader of a social and political act of transformation[4]. In the same way Laura Mulvey speaks about the relationship between the viewer and the cinematographic text, highlighting the importance of the subconscious and the awareness connected to it when attending such a play[5].

Contemporary theater as a representation of the “real”

In the modern socio-political framework of the MENA area, the role of theater was fundamental especially along the evolution of the Arab spring of 2011. Indeed, it is now that activist artists play out ‘the public sphere’ showing their ideologies and their dissent. Theater is now almost the only means of communication: TV, radio and internet are under the control of censorship and sometimes they are cut off in order to avoid the spread of pro-revolutionary messages. Plays are used as tools for fostering revolutionary ideas. Theater and public are in a continuous intersection and in an exchange relationship, defined as one “between the inside and the outside”, an interchange stage-public but also actor-spectator, which intersects the internal dynamics of the theater with the external ones of the political and social sphere[6]. In this context, theatrical works such as Yahia Yaïch, written by the Tunisians Jalila Baccar and Fadhel Jaïbi, are considered as the most significant theatrical plays in representing the fall of the dictator before the Arab spring, the work is a clear attack on politicians, invited to review their relationships with citizens.
In this historical moment the border between reality and fiction is very blurry, what is staged is so similar to the reality that they blended together. No only shows the theater what is real, but also it does it while the reality itself is happening. With the same purpose, the work of the Egyptian journalist Sondos Shabayek “The Tahrir Monologues” is implemented. Also in this case, the work aims to support citizens who feel protagonists not much of the story, but of History, as they personally experienced it. Therefore, it is so that art mixes with everyday life, it is no longer something abstract but more than ever something true and real. The actors are not there to act but to narrate what is happening to their country, hoping to communicate with their fellow citizens, and with the whole world, abut their ideologies.