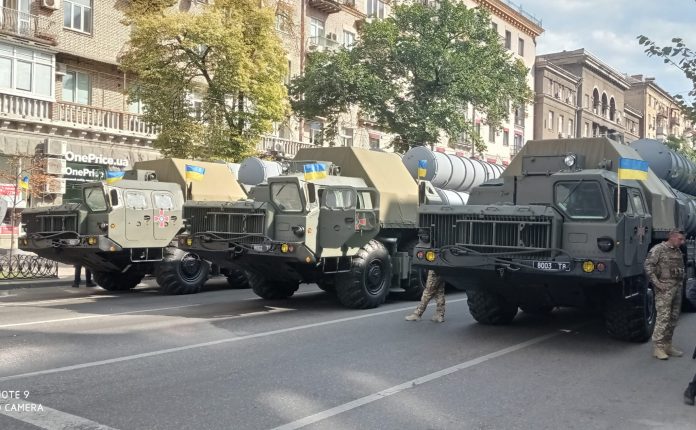 Field report from Kyiv during the 30th anniversary of Ukrainian independence

Even though Ukraine is trying to reach EU democratic standards, the country is still characterised by an oligarchic system and political leadership that has made nationalism and militarism the cornerstones of its domestic politics and strategic communication.

On August 24th, 2021, Ukraine celebrated the 30th anniversary of its independence from the Soviet Union. For the occasion, the capital was coloured blue and yellow and hosted a series of events attended by people from all over the country. The celebrations saw as main events the military parade in the capital and a naval parade in the port of Odessa on the Black Sea.

This year celebration underlined how Ukraine is still looking for its identity amidst Euro-Atlantic aspirations and a Soviet past. Two major revolutions, the Russian annexation of Crimea and the clashes in the Donbas, have represented crucial moments of rupture in the nation’s policies, revealing the difficulty in distancing Ukraine from a cumbersome past and dealing with internal fractures.

The future challenges of Ukraine are different and will depend not only on the will of its leadership but also on the geopolitical weight that the nation will have to balance international and regional powers’ interests in the Eurasian region.

Energy is undoubtedly at the top of the national agenda. Faced with the cessation of gas supplies from Russia, in the early 2000s, Ukraine realised the importance of moving towards energy independence and decided to expand its nuclear power generation capabilities. However, the energy produced only covers part of the internal needs (1/3 of the country’s energy is imported), and Ukraine is far from exporting to other states. Furthermore, recent developments regarding the finalisation of the North Stream 2 agreements between Germany and Russia risk depriving the country of its strategic role as a transit corridor.

Before visiting Ukraine to take part in the celebrations for Ukrainian independence, German Chancellor Angela Merkel met in Moscow the Russian President Vladimir Putin to discuss regional issues and Germany-Russia relations. This meeting alarmed Kyiv since Ukrainian President Zelensky rightly believes that North Stream 2 could be a dangerous geopolitical weapon in the hands of the Kremlin. Although Germany has assured Zelensky that it intends to renew the transit contract with Ukraine expiring in 2024 and the Kremlin would see further sanctions against it if it uses Nord Stream 2 as a geopolitical lever, Ukraine is concerned about losing its strategic role in EU-Russia relations.

The situation in Crimea is different. Ukraine remains firm on its positions, believing that the referendum sanctioned the Russian annexation of Crimea is invalid and therefore considering the current situation a military occupation in all respects. Under President Zelensky, an online platform has been established that intends to assist all negotiations between the allies, which the Government intends to return the territory to the country. In this circumstance, more than ever, a severe vacuum of international law has counted. The right of peoples to self-determination clashes with contextual realities, and it would seem that the recognition of independence goes hand in hand with geopolitical interests rather than with the exercise of a democratic right.

Walking through the streets of Kyiv, even the most distracted observer can see a growing nationalism. Yellow and blue colours and flags cover all available spaces. There are advertising signs that recall militarism and photos of the fighters who lost their lives at the border in various Kyiv areas. There is a perceived propaganda intent for the Ukrainian capital and a push towards a growing national sentiment. The risk is that the affirmation of the Ukrainian identity will cancel the Russian culture that has been part of the country’s past and is still represented in various parts of the country by people of Russian mother tongue or ethnicity.

Still today, there is an incompatibility with the European institutions due to that oligarchic system that continues to characterise Ukraine. For instance, the Ukrainian oligarch Ihor Kolomoisky helped Volodymyr Zelensky to become president. In 2019, in the days before the elections, Kolomoisky’s TV channel Channel 1 + 1 aired non-stop the comedy shows of the current president.

Kolomoisky has several lawmakers on his payroll and embezzling money from his private bank, which was nationalised due to bankruptcy. Zelensky was also supported by Victor Pinchuk, who in 2019 was part of the negotiation with Russia along with Kuchma, Pinchuk’s former president and father-in-law. Everyone in Ukraine remembers Kuchma for corruption and creating the monopoly of the oligarchs, while Pinchuk owns Interpipe and four successful TV channels.

Ukraine looks at the Western democracy to break with a past. The country aspires to join the European Community and NATO and an ever-greater integration into the European energy markets. However, several observations suggest the improbability of Ukrainian desire in the short term. In fact, despite the efforts made, the country does not entirely respect European standards. A fragile currency compared to the Eurozone, a highly oligarchic system, and some problems with freedom rights make Ukraine still far from the Western standards.

Furthermore, the nation’s participation in NATO risks sparking a conflict with Russia and the interest of the Western bloc in the country is not such as to take this risk. Further, Kyiv is struggling to maintain its role as an energy corridor, well aware that its strategic geopolitical positioning constitutes a large part of its appeal to foreign powers and, therefore, to attract investment. Undoubtedly, North Stream 2 represents a threat to the country, which will try in every way to protect its position within the dense network of Eurasian energy markets.

Finally, the nation is facing essential reflections regarding its militarisation and nationalism. Undeniably, Ukraine is experiencing growing nationalism as the reaffirmation of the Ukrainian language to the detriment of the Russian one is part of this process. In addition, the Ukrainian Government is heavily financing the military sector despite the national severe economic situation and people’s unhappiness about it. Although part of these flows come from foreign subsidies (the United States has spent $ 2 billion on military aid since 2014), Western support is perceived as an unreliable source in the long term, and the need for independence from any form of foreign interference is increasingly gaining ground.