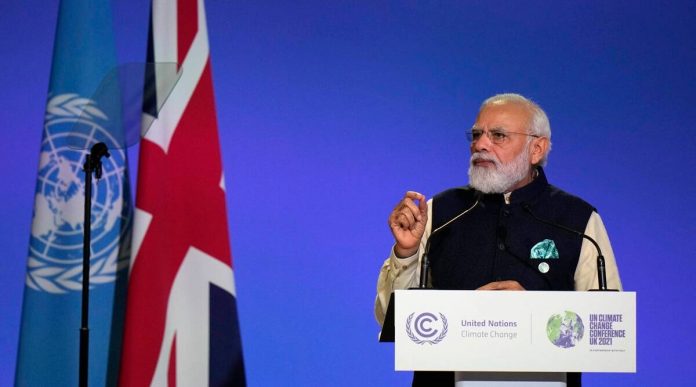 With its soft and hard power capabilities, India is a solid regional hegemon rival to China. Owing to China’s absence from the G20 and its failure to lead climate action, India is positioning itself as Asia’s responsible leader.

Actively engaging in the unfolding of international events in recent years reflects India’s rising influence as the world’s largest democracy and a leader of developing countries. India’s remarkable soft power potential, ranging from religion and culture to democratic traditions and economic cooperation, stands above all her untapped resources.
Although China is the most significant source of greenhouse gas emissions, its commitment to climate change is limited. While India, with a population of 1.3 billion, generates just 5% of the world’s carbon footprint. The absence of China from COP26 creates room for India to take the lead in climate action. The balance of power against China in Asia combines India’s military and soft power. On soft power vein, COP26 Summit in Glasgow reflected India’s sincerity and enormous progress in combating climate change, as evidenced by Modi’s address. Regardless of economic competition among nations, heavy lobbying from the fossil fuel cartel and delayed transfer of technology and development in indigenous green technology, India is striving hard to cut its emission year on year with its ambitious projects and, unsurprisingly, achieving them ahead of schedule. In a meeting with Louise Van Schaik, Head of Unit EU & Global Affairs at Clingendael Institute, she acknowledges that India’s commitment and earnestness in combating Climate Change are inspiring.

In COP26, Modi highlighted the achievements to limit emissions and become carbon neutral by 2070. He laid out 5 Panchamrits of India to fight Climate Change: First, India will take its non-fossil energy capacity to 500 GW by 2030. Second, India will meet 50 per cent of its energy requirements from renewable energy by 2030. Third, India will reduce the total projected carbon emissions by one billion tonnes from now till 2030. Fourth, by 2030, India will reduce the carbon intensity of its economy by less than 45 per cent. Fifth, by the year 2070, India will achieve the target of Net-Zero. The Panchamrits is an example of a soft power based on civilization ethos and values to resolve world problems.
The heritage and culture of India are the beginnings of a world order based on humanity, and this is the cornerstone of ‘Vasudhaiva Kutumbakam’ (the world is one family). The proposal ‘One Sun, One World, and One Grid’ shares the same values and beliefs. Unlike China, India’s foreign policy is not founded on geographical limitation and retribution for humiliation; rather, it symbolises peaceful cohabitation, moral behaviour, Satyagraha (holding onto truth), and a cohesive approach to humanitarian purposes.
China has had a meteoric economic boom, yet it provides little international help and solely profit-seeking investments and loans. The mercantilist strategy of engaging with other nations demonstrates a lack of moral, ethical, and internationalism ideals. China’s cultural and civilizational inheritance is introverted, self-centred, and narrow-minded, and thus lacks the capacity to lead Asia. This is evident in how China exploits other countries: it defrauded the Sri Lankan government over organic fertilisers and pressured other governments to give up territories due to debt defaults. The tributary system’s basic concepts and Sun Tzu’s techniques are intrinsically immoral. India’s soft power has a considerably broader and more profound influence in the region than China’s. The Gandhian ideals of politics with principle, commerce with morals, and worship with sacrifice pervade India’s foreign policy. The tools of soft power include advocation of India’s culture and values. Modi’s address opened with an all-encompassing and broad advocation of Indian Values:

India’s determination to unify humankind in the battle against climate change, terrorism, poverty, hunger, and other universal challenges based on civilization ethos, as opposed to China’s deceptive propaganda and morally devoid Confucianism ideals, makes it an Asian hegemon with a human touch. The Asian century must be founded on compassion, empathy, and generosity, drawing ethos and morals from a civilization that has harnessed these virtues for human advancement and upliftment.
China’s robust economy will not make it a superpower because of its flawed foundational values – Middle Kingdom, inward-looking, resistance-to-diversity and outward-aggressive military. India provides the leadership necessary in the twenty-first century, with COP26 serving an excellent example, with the objective of shared humanity and mutual benefit. In PM Modi’s words, India represents a culture that spreads the idea of ‘Sarve Bhavantu Sukhinah,’ or ‘Happiness for All.’ India bears a great deal of responsibility; it is endowed with centuries of history, and the land of Ashoka, Akbar, and Mahatma Gandhi appears to have earned the right to speak from a moral and secular high ground. Finally, while hard power is crucial in the long run, soft power is far more vital, putting India ahead of China.

Amit Kumar is a doctoral student at BITS PILANI, India. His area of specialisation is China Studies. He works as a Project Assistant at the Centre for African Justice, Peace, and Human Rights, The Netherlands. In addition, he is an Adjunct Researcher at The MirYam Institute, New York.
Disha Sarkar is a COP26 Delegate for Global Youth Development Institute, USA. She is the Negotiator for Action for Climate Empowerment on behalf of the Official Youth Constituency of the United Nations Framework Convention on Climate Change. She also represented UNICEF South Asia at the COP26.