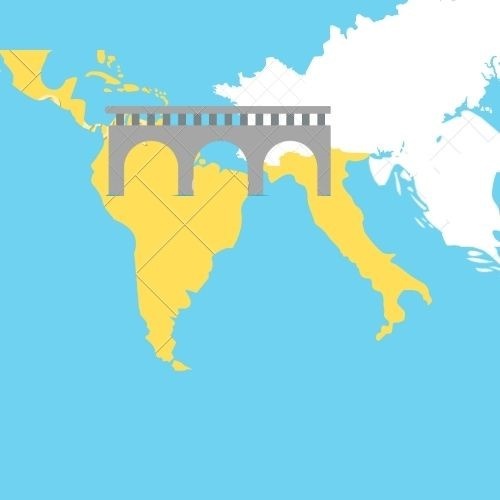 Rome has never really tried to expand in the Orb, except for the Mediterranean and the Balkans (historical strategic compasses of the Italian ruling classes since the birth of the united Italy) and even less, Italy turned to the continent of Latin America in an imperial manner.

Latin America as a geographical extension is too large and diverse to be described in singular.  And it wouldn’t be wrong to talk about the “Americas”. It is a continental pole; it is a Macro-Region, a civilizational cosmos in constant identity dialogue with itself. A region close relative to the “West”, but at the same time distant to it, which contains a multitude of stories, peoples, destinies and dialectics sometimes in tension with each other.
An identity analysis would affirm that if some trait defines Latin America, that trait would be the “Geography of the Otherness“: seven macro-ethnic groups [1] more than eight hundred indigenous peoples, more than four hundred languages and dialects [2]. The numbers and qualities present in the region indicate that we could talk about “several Latin Americas” (Ibero-America, Andean America, Rioplatense America, Caribbean, Luso-speaking, Afro-America, etc.)
This Macro-Region, La “Patria Grande” (the Great Homeland) -as Manuel Ugarte called it-  with this melting pot of identities, which José Vasconcelos had called the la “Raza Cósmica” (the cosmic Race)  where “Latinity” is only one of its founding elements, over the centuries has sailed, or attempted to navigate autonomically in the World-System among the great empires of the planet: from the French Empire (of which there are traces in the Caribbean and its Guyana in South America) to the German “Reichs”.
But from Napoleon III to Kaiser Wilhelm II, through the Cold War, no one has managed to overcome the insurmountable obstacle represented by the United States, for which the region is the “Backyard” to watch from 1823, the year of the proclamation of the always present Monroe doctrine.
But the great absent from the list of the fearless who tried to take Latin America by storm is Italy: Rome has never really tried to expand in the Orb, except for the Mediterranean and the Balkans (historical strategic compasses of the Italian ruling classes since the birth of the united Italy) and even less, Italy turned to the continent of Latin America in an imperial manner.
But that doesn’t mean that Italy cannot, and therefore should, exert its influence, because history, culture, and business allow it, and no less important, the major powers with a presence in the region would have no special objection, for example it should not be seen as a threat to the US in the region, given the Italian character at geographical, geopolitical and economic level.

A favorable record in Latin America

Italy is the distant heiress of the Roman Empire, but of its imperial character only maintains its architecture and archaeology.  Its mentality, its idiosyncrasy is not imperial; it has been forged by a long maritime tradition. (It’s not a coincidence the Genoese origin of Christopher Columbus and the name of the Americas in honor of Amerigo Vespucci).
Therefore the absence of a history of Italian imperialism in Latin America, as well as of a common Latin heritage, is a great advantage.  A history without friction with the region, a demanding of products and raw materials of the region, a country rich in “Know-How”, and owner of a great Soft Power, Italy has all the credentials to become an ideal partner for Latin America, a true vector of stability for the region.

The numbers of Italian presence and influence

Currently, Italy and Latin America are united by some events and organizations that carry out constant actions to strengthen their ties. The most remarkable organization which performs these activities is the IILA Institute (Instituto Italo-Latino Americano) which conducts the Italy-Latin America and Caribbean Conference on a permanent basis, as well as the Italo-Latin American Forum of SMEs.
The numbers of the Italian-Latin American link in cultural diplomacy, exchange and investment suggest in fact that the previous institution has done a commendable job from the 2000s to the present day:

Latin America is Italian in the same way that Italy is also a little bit Latin American. The first is home to more than 2 million Italian citizens, as well as some 55 million Italian descendants. The second is the residence of some 350,000 Latin Americans. This numbers implies that the association between the Mediterranean peninsula and the “América Criolla” are both inevitable and authentic. And this asset must be capitalized.
55 million descendants, and perhaps more, who offer the region and Italy many possibilities, an unusual margin of maneuver that European powers, like the French and the Germans, lack and will continue to lack.
A “cooling” between the diaspora and the Italian Motherland must be avoided at all costs, because demography is potentially political and economic capital. Demographics and culture are what would allow us to talk about an Italo-America in the region.

A strategy for Italy in the region

Italian foreign policy towards Latin America must combine a number of elements such as Development Cooperation, trade and investment and a two-edged cultural promotion strategy: one to attract the descendants of Italians, another to attract Latin American populations to Italian culture. To function, such a strategy requires substantial investments and the provision of a good degree of perseverance. The elements that should not be missing in the Italian agenda towards Latin America are the following:

Italy has the credentials to become a major player in Latin America and to play a stabilizing role in the region, as well as counterbalancing the influence of other geopolitical actors in the region. Some of these reasons have already been explained:  Latin cultural affinity, a good tuning that provides Italy’s non-imperial history in the region, an excellent flow of trade, cultural, investment, and technical cooperation. In these times of transition, of geostrategic tension, and collapses, fruit of the impetuous Return of History in international relations, perhaps it is the ideal time to propose that the future of Italy is also in the Americas.

[1] Darcy Riberio identifies the region’s ethnic groups in “Macro-Ethnicities”: American peoples that had reached, or approximated, the level of “High Civilizations”, before the European Conquest, which reached high demographic quotas, and were able to survive until today, as large human blocs.
https://static.nuso.org/media/articles/downloads/3062_1.pdf
[2] The UNICEF Socio-linguistics Atlas identifies about 522 ethnic groups or “peoples”, and 420 native languages currently in use within the region.
https://www.unicef.org/lac/media/9791/file/PDF%20Atlas%20sociolinguistico%20de%20pueblos%20ind%C3%ADgenas%20en%20ALC-Tomo%201.pdf